Ms. Zhang Xinyi is a Falun Gong practitioner and United Nations refugee. On April 28, 2005, she was arrested by the Tianxin District Public Security Sub-Bureau in Changsha City and by the Xinkaipu Police Station. At the same time, her family home was ransacked and personal property was confiscated. In August, soon after a secret trial and without her family members being informed, Ms. Zhang was sentenced to a three-year term of imprisonment by the Tianxin District Court in Changsha City (the presiding judge was Chen Xinzheng). Ms. Zhang refused to accept the decision and lodged an appeal. However, in December 2005, Ms. Zhang's appeal was rejected by the Changsha Intermediate Court (the presiding judge was Yang Saiyu). On January 12, 2006, Ms. Zhang was imprisoned in the Hunan Provincial Women's Prison. Ms. Zhang is now illegally imprisoned in the prison orientation team.

At present, there is much cause for concern about Ms. Zhang Xinyi's situation. Because she cultivated and practiced Falun Gong, persisted in her belief, and clarified the truth to people, Zhang Xinyi was persecuted by the Chinese Communist Party more than once.

In August 2002, Ms. Zhang and her husband, Li Guojun, were teaching at the Jinbian Chinese School in Cambodia. They were illegally arrested by the Cambodia Immigration Office. Later, they were deported to China. Cambodian government personnel told the couple clearly that they were told to do this by the Chinese Embassy.

At that time, Ms. Zhang and her husband had already applied for asylum to the UNHCR (Headquarters of the Office of the United Nations High Commissioner for Refugees) and the application was accepted, so they were officially refugees protected by international law. Because of this, their case received a lot of media attention. On August 23, 2002, the Xingzhou Daily reported this event in an article entitled, "UNHCR criticizes the government for not protecting two Falun Gong practitioners" (see illustration).

Police imprisoned Ms. Zhang and her husband for one month when they were deported to China. Only after international rescue efforts, were they released. 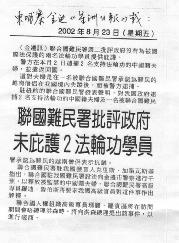 Ms. Zhang was most recently arrested on the afternoon of April 28, 2005. Her family members returned home and saw that the house was in disorder. The computer, printer and Dafa books were gone, and Ms. Zhang had been taken away. From that day to the time that Ms. Zhang was illegally sentenced and sent to Hunan Provincial Women's Prison, about eight to nine months had passed. Ms. Zhang's husband, Mr. Li Guojun, has not been allowed to see her even once. Every time Mr. Li went to the prison to visit his wife, the authorities lied and said, "Zhang Xinyi does not want to meet with you." In addition, they frequently withheld letters from family members. Ms. Zhang went on a hunger strike for 40 days to protest. Officials handcuffed Ms. Zhang to a window shutter to force-feed her.

In August 2005, the Tianxin District Court, fearful of letting other people know about the trial, secretly held a trial to hear Ms. Zhang's case, and didn't even notify her family. Her husband Li Guojun asked the presiding judge, Chen Xinzheng, about the case. The judge shirked responsibility and even tried to blame Mr. Li, saying such things as, "You did not show up." Ms. Zhang was thus "illegally sentenced" and imprisoned for made-up crimes. Mr. Li and their son Li Yanwen (a high-school senior) are both currently under tremendous pressure.

We appeal to all people around the world to help rescue Ms. Zhang Xinyi, and help her obtain her freedom again.

Personnel from the Tianxin Procuratorate who participated in "the public prosecution": Prosecutor Yu Lihua

Other Related units and personnel: