(Clearwisdom.net) In the ruins of the ancient town of Mampsis in the southern part of Israel, some mosaics with srivatsa symbols were recently discovered. Mampsis was one of the four towns of the Nabateans in the fourth century AD. 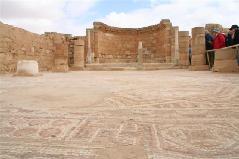 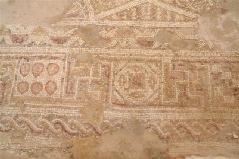 The mosaic is made from an ancient, durable decoration material made of floor tiles or bricks from the Roman Empire period. It was very popular in the Byzantine Empire and Middle Ages, but was gradually replaced by wall paintings by the thirteenth century. The art of the Mosaic is to embed shiny, colorful pebbles and other glossy materials into cement or plaster, and using the principles of reflected light to evenly spread the light in the room. It's normally used on floors, walls and round shaped ceilings. The mosaics with the srivatsa symbol in the pictures were on the floor of a church called "Nile" at that time.

“Austria: People are Supportive of Falun Gong Practitioners After Hearing about the Atrocities in Sujiatun Concentration Camp (Photos)”