Austria: People are Supportive of Falun Gong Practitioners After Hearing about the Atrocities in Sujiatun Concentration Camp (Photos) 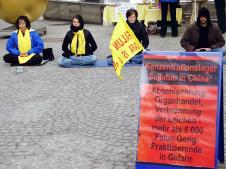 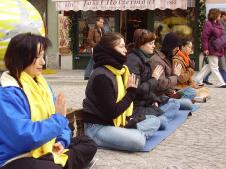 After reading the poster exhibition exposing the brutal persecution of Falun Gong practitioners by the Chinese Communist regime and posters about the Sujiatun Concentration Camp, many people were shocked. They expressed their strong condemnation of the Chinese Communist regime. A great number of people came to sign a petition expressing their support to Falun Gong practitioners. 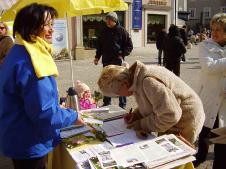 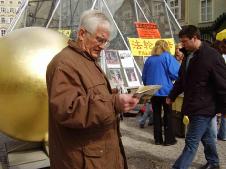 Another lady cried after viewing the poster exhibition. She was from Yugoslavia, which was under the Communist rule. She knew the brutality of Communist regimes very well and encouraged and wished the practitioners well.

A gentleman from Iran watched practitioners doing Falun Gong exercises from a distance. After quite a while, he came forward and put his name on the petition. He said to practitioners that when he watched them doing the exercises, he felt a strong force; it is this force that makes the Chinese Communist regime very afraid, a force for peace. He said it reminded him of Gandhi and that this force would surely be victorious.

A young lady said to practitioners that she very much wanted to sign the petition, but she was not eighteen yet. However, she would tell everyone she knew about this terrible thing happening in China. She wanted to go home immediately to tell her parents.