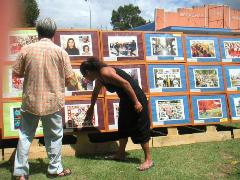 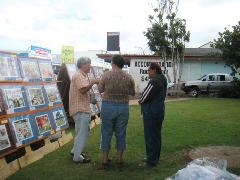 "You've done great, thank you for upholding justice for these orphans"

When photos depicting the beauty of Falun Dafa and the persecution of Falun Gong practitioners inflicted by the Chinese Communist regime were publicly displayed, local people in Kaitaia were outraged. One woman looked at the photo introducing the wide spread of Falun Dafa and said, "Beautiful!" When she walked in front of the photos of orphans whose parents have died from persecution for practicing Falun Gong in China, she squatted down, touched the faces of the orphans in the photos, and carefully read the introductory information about them. After quite some time, she stood up and pointed at the photos and said, "What lovely children, Can I adopt them?" She was disappointed when we told her that they were not able to be adopted at this time. She walked to the guest book and wrote, "What you've done is great, I thank you for upholding justice for these orphans. The world needs more people like Falun Gong practitioners who have concern for them." 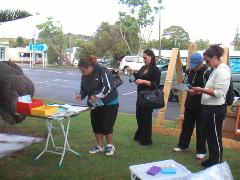 One resident's message, "Let's say No to the evil!"

One man looked at the photo exhibit for a long time, and finally he asked, "Can I buy these paintings? The paintings are so beautiful. I like them very much." Practitioners told him that the paintings were not for sale, but that he can download them for free from the website. He looked so happy and repeatedly thanked the practitioners. Before leaving the exhibit, he asked, "Do you want to broadcast the news about the photo exhibit at the radio station?"

After he left, a broadcaster from a radio station came to our booth and asked the practitioners, "I want to practice Falun Gong, how can I find practice site?" Upon learning that there was not a practice site in the local area, he immediately expressed that the spread of Falun Gong in Kaitaia would start with him. He had heard about Falun Gong two months prior from his friends, and had thought about learning Falun Gong. Today, he saw Falun Gong at the exhibit, and he was very happy. He expressed to the practitioners that he hoped the photo exhibit would stay for a few more days so that he could quickly learn to practice Falun Gong. Practitioners told him that for the predestined people in Kaitaia, the photo exhibit would return two days later and they would then demonstrate Falun Gong exercises. He repeatedly thanked the practitioners and expressed that he would arrange a space at the radio station's gallery for the photo exhibit, and at the same time announce the news through the radio station in Northland.

Kind-hearted residents of Kaitaia expressed great concern after hearing the story about Falun Gong practitioner Ms. Gao Rongrong, whose face was disfigured and who was tortured to death by police officers of the Chinese Communist regime. Looking at Ms. Gao's photos, they denounced the Chinese Communist Party's (CCP) inhumane persecution and left messages in the guest book, "Too cruel, too inhuman, let's say NO to the evil!" 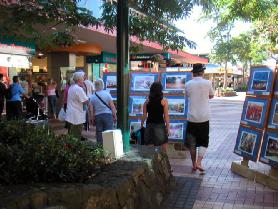 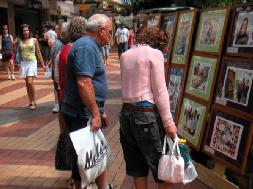 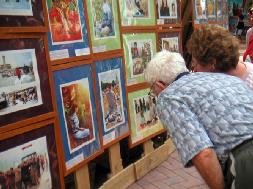 At dawn, the practitioners reached downtown Whangarei, 148 km (92 mi.) from Kaitaia. Before the displayed photos were placed on their display racks, many passersby were drawn to them. They stopped in front of the photos and appreciated them.

A mother and her daughter told Falun Gong practitioners that they had once taught English in China, and they liked the Chinese culture and people. She had read Zhuan Falun and could not understand the Chinese communist regime's senseless persecution. At the same time, she showed her admiration for the Falun Gong practitioners' persistent efforts. She wrote in the guest book, "Thank you for telling us about this happening in China. Kind-hearted people, please keep it up all the way until the end." 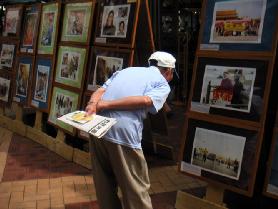 An older man from Guangdong Province views the photo exhibit

An older man from Guangdong Province in China hoped to take more materials for his friends and relatives. Two days ago, he read the Nine Commentaries on the Communist Party and felt that all Chinese people should read the book, and the Chinese people should wake up. He had taken a look at the time since the CCP seized power in China, what it has done to the Chinese people, and what has been left. A seven-year-old girl wrote, "Too cruel, I cried."

An older couple in their 70's left their words in the guest book, "Conscience urges us to call for rescue of these orphans, return them their carefree lives." The older couple were tourists from Australia. They wondered why the CCP has done so many stupid things, murdered so many people, and forced these lovely children to live without their parents. How long can this regime be sustained?

As requested by people in Kaitaia, after finishing the exhibition tour at the northernmost point of New Zealand, Cuperinga, the photo exhibit group returned to the city. After 9:00 a.m., staff at the radio station was busy clearing a space at their gallery for the photo exhibit, and at the same time they conducted interviews of the Falun Gong practitioners. Local people came to visit the photo exhibit, listened to the introduction of the exercises, and learned to do the exercises. They felt that the miraculous effect of Falun Dafa was incredible. Some of them said they felt hot all over, and some said they felt the flow of energy in the body.