Michael Hackmayer in his late thirties and lives in Gondelsheim, a town in southern Germany. As a gardener, he rises before dawn to plant vegetables unpolluted by chemical fertilizers or chemicals of any sort. Once a week he sells vegetables in an open market.

Group practice in a park in Ulm, a city in the south of Germany, and talking to people about the persecution against Falun Gong

Singing is his favorite hobby. When it comes to music, he can't help humming a song with a strong and quick beat. "When working on the farm, singing the song gives me the feeling that time is flying by more quickly. I am also fond of the compositions of Bach. And of course, I still sing the songs of Falun Gong," he said.

At the age of thirteen, Michael became a member of the Hilsbach Church Choir. At the age of sixteen, he formed his own rock band. Fans of rock throughout the Kraichgau area will definitely remember Michael as the former lead singer and keyboard player of the band "Wild Frontier" who played gigs during the eighties.

Pointing at an old photo, Michael said, "This is how I looked twenty years ago." If he didn't mention that, no one would recognize him as the youngster on the photo with long hair, waving his hands passionately on the stage. In the photo, a large crowd of people wave their hands in excitement together with him.

When asked why he did not continue with his singing career, he explained, "My throat was in constant pain due to ten years of singing. So I could not continue singing. Since then I left the band and thought it would be out of the question for me to sing on stage again."

During his career as a band singer, he also received professional training for being a machinist and a gardener respectively for three years. Finally, he chose to be a gardener and thus his garden turned out to be his little stage on which he sang to entertain himself.

The rocker changed his style

As the years passed by, Michael heard about Falun Gong. Due to this encounter, a chance to sing on the stage again was unexpectedly arranged. "In 2002 when I read the book Zhuan Falun, I felt that the principle of "Truthfulness-Compassion-Forbearance" on which Falun Gong is based is very good. I hoped that I could be a person who lives my life by those principles. After practicing the Falun Gong exercises, my back pain was miraculously healed. Previously I had tried various methods to heal my pain, but in vain," Michael recalled. 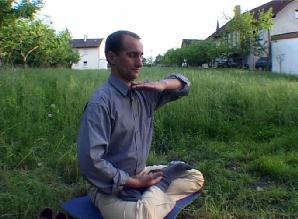 On the other hand, Michael was deeply shocked by the Chinese Communist Party's (CCP) brutal persecution against "Truthfulness-Compassion-Forbearance." "I feel obliged to take action to stop the persecution. I consider songs an ideal medium to explain to people what is happening in China."

When Michael attempted to sing songs again, he was amazed by the fact that his damaged throat was slowly recovering. Changes happened not only to the inner part of his body but also to his outer appearance. His long hair and hip clothing were replaced by short hair and suits. The former rock singer also changed his singing style. 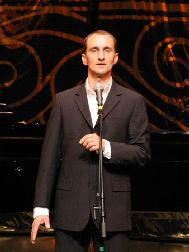 In January 2005, Michael performed in a concert at London's Queen Elizabeth Hall as part of a Gala event for the Chinese New Year

The first song after his cultivation began

There is a little story behind the first song created and sung by Michael after he began cultivating in Falun Dafa. "After I had practiced Falun Gong for half a year, I felt the eagerness and excitement to use music to express my inner changes brought by Falun Gong. Once when I was bending down to rid peanuts of mud, suddenly the words, 'Immer feiner, immer klarer' (the finer, the more celestial) flashed across my mind. Then the words were followed by musical notes that repeatedly appeared and became clearer and clearer. In the following two or three weeks, the notes kept lingering in my mind, with the lyrics and melody becoming more exquisite and finally developing into a complete song."

Afterwards, he created alone or with others some songs to express protest against the persecution of Falun Gong. He has already made three CDs. Just before Christmas last year, he recorded his third CD, Lotus Flower, on the cover were the words, "Musicians perform for human rights, dedicated to the orphaned children of Falun Gong practitioners persecuted to death in China."

A practice site was set up

In the beginning of 2002 when Michael just started to practice Falun Gong, he was the only practitioner in his neighborhood. "After I had practiced Falun Gong for four months, through studying the Fa (principles of Falun Gong) and sharing cultivation experiences with fellow practitioners in other cities, I came to realize why practitioners have to tell people the facts about Falun Gong. Since then, I began practicing Falun Gong alone on the lawn behind Karlsruhe Palace in a neighboring city on Sunday mornings. Meanwhile, I offered passers-by free Falun Gong leaflets. On Monday evenings, I also set up a practice site at my home. Gradually, more and more people came to the two practice sites to practice the exercise and study the Fa."

Michael also noticed that some naturopathy or health associations periodically held seminars and that community centers or non-governmental organizations took interest in all kinds of topics. Therefore, Michael offered to teach members of these organizations how to practice Falun Gong. As well as teaching the exercises, he also told people about the CCP's persecution against Falun Gong.

With his morality upgraded, he came to some new understandings

"Practicing Falun Gong brought about great changes in me. When I was receiving my professional training as a machinist, all the factory workers took tools home for their personal use and I was no exception. I hadn't been bothered by this indecent behavior for ten years. But after I practiced Falun Gong and read a story in Zhuan Falun about a Chinese factory worker who returned the towels to the factory that he had taken home, I came to understand that it is wrong to take the tools home. I felt quite uncomfortable about the stolen tools I had and felt the urgent need to return the tools to the factory where I had done my professional training. Much to the surprise of the factory owner, ten years later someone bothered to return the tools. He felt thankful. Without Falun Gong, I would never have acted this way. It was not until now that I learned how to become an aboveboard person," sighed Michael.

The predestined relationship with Falun Gong and his wife

Through practicing Falun Gong, Michael met his future wife Ms. Zhou. Upon mentioning his wife, a gentle smile appeared on his face. An engineer from Hangzhou in China, who used to work near where Michael lives, Ms. Zhou is also a Falun Gong practitioner. They often met each other when participating in group Fa study, group exercise practice and activities to raise awareness of the persecution. They gradually got to know each other well, and fell in love. One year ago, they got married. 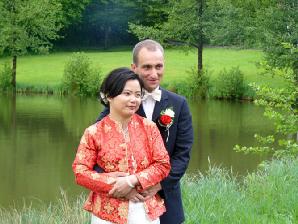 Wedding photo of Michael and his wife

In Germany there are other stories like that of Michael. Originally there were only a few practitioners in each area. But through study and cultivation experience sharing, they gradually increased in number and started to tell people the facts of the persecution and promote Falun Gong. More and more people have been offered the chance to step onto the path of cultivation and return to their original, true self. In the long process, the practitioners also correct their behaviors, based on the principles of "Truthfulness-Compassion-Forbearance," and keep upgrading their moral standard.