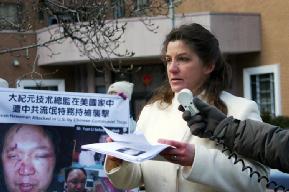 (Clearwisdom.net) At noon on February 9, 2006, Falun Gong practitioners in the Washington DC area and staff from the Epoch Times held a press conference in front of the Chinese Embassy to protest the assault and robbery of Dr. Yuan Li by CCP thugs. Dr. Li is an information specialist for the Epoch Times. The practitioners called on Congress, the FBI, and the Department of Homeland Security to investigate the criminals and those who masterminded the crime. They also called for relay hunger strikes to support attorney Gao Zhisheng and other righteous people who are helping to protect practitioners' human rights in China.

Ms. Min Ge presided over the press conference. She said, "The more irrational the CCP is, the fewer days it has. The CCP thugs' assault of Dr. Li allows the world to recognize the terrorist nature of the CCP. Now, even more people will resign from the CCP, hastening its demise."

Falun Dafa Information Center spokesperson Dr. Zuwei Huang said, "The CCP's terrorist activities in this free land of the US will attract the attention of US society and the Department of Homeland Security. This time the CCP has targeted not only an individual, but a senior newsman for an influential media that exposes the CCP's true nature. This is the CCP's state terrorism operating in the United States. The US government must not ignore it."

Mr. Zhang Tianliang, a columnist for the Epoch Times said, "The CCP has used all of China's resources to persecute Falun Gong for more than six years. Torture, rape and other brutal methods cannot intimidate Falun Gong. We aren't surprised by whatever the CCP does because of its irrational state in its final stage. Those who have read the Nine Commentaries on the Communist Party understand the evil nature of the CCP. After persecuting Falun Gong for six years, Zeng Qinghong, Luo Gan and their faction still underestimate our courage and commitment to spreading the truth and resisting the persecution.

The practitioners, staff of the Epoch Times, readers and local people called on all Chinese people to recognize the evil nature of the CCP and quit the CCP and its affiliated organizations. They also called on the international community to resist the CCP's intrusion overseas and stop the CCP's terrorist activities.