(Clearwisdom.net) December 10, 2006 was International Human Rights Day, and Falun Gong practitioners in San Diego held a rally in Balboa Park to support the 16 million people who have withdrawn from the Chinese Communist Party (CCP). They also held a photo exhibition about the CCP's tyranny and an anti-torture exhibition. 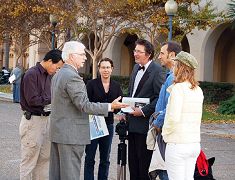 Falun Gong practitioners expose the CCP's crimes at the rally

Supporting 16 million withdrawals from the CCP

Balboa Park attracts tourists from all over the world, and among them are many Chinese people. Several groups of Chinese passed by the rally. Some called to their friends, "Hurry, have a look!" Some of them said, "The world is changing fast. Who knows what will happen tomorrow?"

A few Chinese tourists went over to the Falun Gong booth. The Falun Gong practitioners were friendly to them and gave them copies of the Nine Commentaries on the Communist Party. The group leader said in excitement, "Ah, it is the Nine Commentaries on the Communist Party! Each one of you should get a copy. Take it back to study and withdraw from the CCP afterwards." She told the practitioners, "All who read the Nine Commentaries will withdraw from the CCP." Pointing to two people in her group, she said, "These two have withdrawn." She checked with the men in her group, asking, "Have you taken one?" One of them said with a smile, "I am not a member of the CCP, but I will study it carefully." (As a matter of fact, members of the Communist Youth League and Youth Pioneers League should withdraw too.)

“Taiwan: "This Is the First Time I Have Seen Such a Band!" (Photos)”