With a Sign of "Service People" Hanging High, the CCP Refused to Discipline Policeman Who Assaulted 85-Year-Old Lady 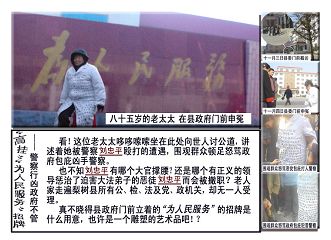 (Clearwisdom.net) On September 8, 2006, policemen Liu Zhongping and Liu Feng from Kangping local police station in Lishu County, Jilin Province, arrested practitioner Mr. Meng Xiangqi. They also took away his personal ID card, a bank deposit card with 400 yuan on it, and 800 yuan in cash. Mr. Meng was illegally sentenced to six years of imprisonment. To this day his family has not been notified of the sentence.

On the morning of October 30, Mr. Meng's grandmother, Ms. Zhang Shulan, went to Kangping local police station and requested that the officer responsible (policeman Liu Zhongping) return the money and release Mr. Meng. Officer Liu insulted and humiliated her. Ms Zhang was so angry and upset that she fainted. Later, she was thrown out of the police station. For the whole day she had no food or anything to drink.

Around 7 p.m. that evening, Ms. Zhang went to Liu Zhongping's home to again request that he return the stolen money. Liu blocked her at the stairway, again insulting her. Though his wife tried to stop him, he slapped Ms. Zhang hard across her face, and she fell to the ground. Officer Liu called his son, his daughter-in-law, another policeman, Liu Feng; and a few plainclothes officers. At least three police vehicles and four black vehicles came to the building. They dragged Ms Zhang to a street nearby. Some students and passerbys were attracted to the scene. When they found out that the policemen were beating an old lady, they were all indignant. The policemen and plainclothes officers sneaked off when the situation turned against them.

On October 31, one of Ms Zhang's family supported her by the arm and went to Kangping local police station again. They wanted to talk about how she was beaten the day before. However, the staff in the police station sneaked away. With no other recourse, she went to the Public Security Bureau in the afternoon. The officer told her, "The manager is not available. No one is here to take care of this matter."

About 8 a.m. on November 2, again supported by her family member, Ms Zhang went to the procuratorate. She told of her desire to report what had happened to her. A manager named Li said, "I will tell the staff to make a record of this." They could see he was obviously stalling. After the persistence of the family to report the incident, he finally said, "Go to the third floor, and talk to chief procurator Zhou in room 307." (Later we were secretly told that Zhou was an office chief instead of chief procurator.)

Ms. Zhang's family member told "chief procurator Zhou" all about what had happened to the 85-year-old lady, how policeman Li Zhongping had insulted her and beat her. Zhou asked when and where Ms. Zhang was struck. Then he said, "Liu Zhongping hit her outside his working hours. This incident is not considered as 'a policeman hitting someone.' It is not considered illegal or a violation of regulations. We don't take care of such incidents here. Talk to the Public Security Bureau." Ms. Zhang's family asked him, "If a policeman came across a robbery or murder after work, he should not do anything about it, because he is no longer a policeman after work, right?" Zhou said, "It is a policeman's responsibility to do something about a robbery or murder. He is considered a policeman at that time. However, he hit someone after work and he is not considered a policeman. So we can't do anything about it. Talk to the director or deputy director of the Public Security Bureau." Ms. Zhang's relative said, "The public security bureau, the court and the procuratorate are all evading responsibilities. We will go to appeal in Beijing." A staff member told him, "No one will receive you even if you go to Beijing. Let me tell you a 'shortcut.' Have an exam in a hospital and bring the diagnosis here." The relative asked him, "Will you do something about it if we bring the exam report?" He hesitated for a while and said, "It's another matter whether we will do something about it or not."

A policeman cruelly beat an 85-year-old lady. However, from the police station to the court to the procuratorate to the county People's Congress, everyone evaded responsibility and would not do anything about it. There is no place to appeal for justice under rule of the CCP.