(Clearwisdom.net) On October 21, 2006, the annual Granny Smith Festival took place in Eastwood, a city to the north of Sydney. On this beautiful Saturday, many local families came out to watch the parade, and it was estimated that about 70,000 people came to the festival. This is the sixth year for Sydney Falun Dafa practitioners to participate in the parade. The debut of the Divine Land Marching Band was a wonderful surprise for the attendees. 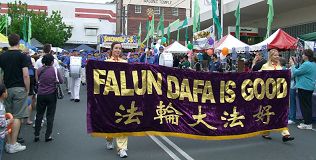 The Granny Smith Festival was established to honor Marie Smith, an agricultural technology immigrant who came from Great Britain in 1838. She cultivated the green apples that people so enjoy. By then, the Smith family lived in the Eastwood area, where they cultivated this kind of apple.

The parade started at 10 a.m. It was led by Ryde Council's float, a huge green apple, and followed by processions from different ethnic communities. The Sydney Falun Dafa Association was also invited to the parade. When the Divine Land Marching Band first appeared, the people along the streets were very surprised and curious about it. The band has both Chinese and Western musicians, and the music they performed was new and exciting.

When the Falun Gong procession marched past the main stage, the host announced: "Falun Dafa, also called Falun Gong, is a kind of qigong exercise. Its teachings ask people to believe in Truthfulness Compassion and Tolerance. Falun Gong has five sets of exercises. The movements are slow and look like Tai Chi or yoga. Practicing Falun Gong can make you feel happy, relaxed, and energetic. It is also very easy to learn. There is a Falun Gong group practice site in Eastwood Park."

After the parade ended, a local city council member and a radio station host told practitioners that Falun Gong's procession was magnificent and that the new Divine Land Marching Band was very good.

Falun Dafa practitioners from Sydney set up a table to distribute flyers about Falun Gong's exercises and the persecution of Falun Dafa in China. The table was on a main street and close to many Chinese stores. Many Chinese tourists also came to the table to learn the facts. Some spectators saw the exercise demonstration and immediately wanted to learn the exercises.

“More Details about the Murder of Practitioner Ms. Zhou Caixia in Inner Mongolia”