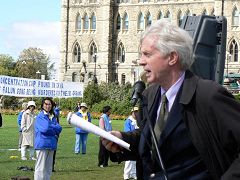 Mr. David Kilgour, former Canadian Secretary of State for Asia-Pacific, spoke at the rally on September 26, 2006

In his speech, Mr. Kilgour thanked Falun Gong practitioners from Toronto and Montreal and Diane Bourgeois, member of Parliament, for their presence at the rally. MP Bourgeois and Mr. Kilgour were colleagues on the human rights committee in Parliament. Mr. Kilgour related the following:

"This a true story of something that happened at the Boston transplant conference this past summer. By the way, there were surgeons from all over the world, including several hundred from China. After Hilary Clinton spoke, there was a reception for all of the delegates, thousands of delegates. And in one corner of the room there was a doctor from Germany and his wife and talking to a doctor representing several hospitals in Tianjin in eastern China. The doctor from China was going on about how their hospitals had done 2,000 liver operations this past year. In Germany, it should be noted, they do about 700 per year counting all the hospitals in Germany. So the conversation went on for 20 minutes and finally the doctor from Germany and his wife said, 'Where are these organs coming from?' And do you know what he said? He said, 'Ask the Falun Gong practitioners outside this hotel where those organs are coming from.'

"I think that is as close to, may I use the phrase, a 'smoking scalpel' as we are going to get. And I might add, too, that at those Tianjin hospitals—there are three or four of them—85 percent of the people getting those transplants are coming from outside of China. And we have that on good authority. So the next time you talk to somebody who tells you that they are going to China to get an organ from a murderer or a rapist, the chances are, in all likelihood, that they are getting it from a young man or woman who is a Falun Gong practitioner, a person who is devoted to truth, forbearance and compassion. Just like all of you. That is where those organs are coming from.

"This has got to stop NOW !!! Does anybody disagree? (The audience responds, "No!") And it has got to stop before the Olympic games start. If the government of China thinks that anybody is going to attend their games, then they have got to stop this crime against humanity, as David Matas has said, "NOW." Not two years from now.

"I should think things are going really well at the UN Human Rights Council meeting in Geneva. David Matas is there now, probably meeting with Manfred Nowak, the UN Rapporteur on torture. I made a submission there last week, and you might be interested to know that my submission was two minutes long. The Chinese delegation then spent 45 minutes asking for, can you believe it, five minutes right of rebuttal rather than a three-minute right of rebuttal. Everyone else is entitled to three minutes and the President of the council from Mexico ruled that they would get three minutes just like everybody else.

"So things are going well in the United Nations Human Rights Council. They went extremely well, I think, at the European Union summit with China, where I am happy to tell you that the issue of organ harvesting was raised with the foreign minister of China, on behalf of the European countries. The point was made that a lot of Europeans are concerned about this issue and that they want the government of China to look into it independently.

"We have a lot of speakers here today, so I will stop now. But all of us, everybody here today, has got to get on the Internet and send emails to everybody you can to put pressure on the government of China to stop this, and they will stop it. Right over there in that building the land mines treaty was signed. And Jody Williams, when she was awarded the Nobel Peace Prize for her part in that effort, said that had been won because of the Internet.

"People on the Internet sent email messages to everybody they knew. So please, everybody here, get on that email machine and send emails to as many people as you can, and we will get this abomination stopped, sooner rather than later. Thank you very much."