(Clearwisdom.net) Since the Conservatives have come to power in Canada, the government has been cooling off its relations with China by avoiding meetings, canceling trips to China, and similar actions. Last Wednesday, September 27, the Canadian Foreign Minister denounced the Chinese Communist Party's (CCP) current human rights situation.

People have started to notice that, since the Conservative Party has been in power, the government's policy on China seems to have made an abrupt about face when compared to the policies of the Liberal Party, which was in office beginning in 1993. The Liberals' diplomatic policy ignored China's human rights issues and regarded the economy as of primary importance, while the current government's main focus is on China's human rights and other issues. 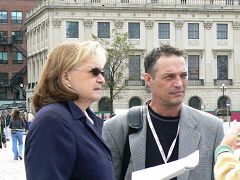 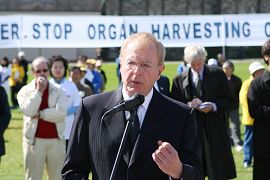 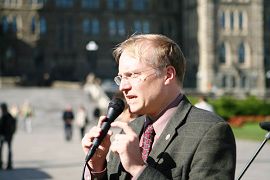 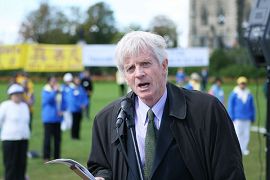 David Kilgour made a speech

reported on September 27: "A year ago, in a solemn signing ceremony, China and Canada announced a 'strategic partnership'--the highest political relationship that Beijing can bestow on a friendly country. But a few months later, something happened in Canada that never happens in China: a democratic change of government. Since then, the new government of Prime Minister Stephen Harper has deliberately avoided the 'strategic partnership' term. His China policy has fallen into limbo, with the two sides barely talking."

The report said that Beijing remains keen on the partnership, but Ottawa has been cool or uninterested. "It's going nowhere," one participant said privately. Canadian officials say China is "not on the radar" of Mr. Harper's government.

cited a foreign affairs official that the government has still not sent a cabinet minister to China more than eight months after winning power. Several cabinet ministers have made plans to go, notified the Chinese government of their intentions, then abruptly canceled their trips, to Beijing's puzzlement.

The paper also reported that Natural Resources Minister Gary Lunn might travel to Beijing in November to attend a mining conference and a heavy oil conference. But even that visit is not confirmed yet, officials say. And Mr. Lunn is hardly the senior cabinet minister that China would expect Canada to send.

compared the differences in the China-Canada relationship between the current government and the Liberal rule of Jean Chrétien, "The Conservative approach is a far cry from the first year or so of the Liberal rule of Jean Chrétien. Twelve years ago, one year into his first term, Mr. Chrétien led nine premiers, two territorial leaders, 350 business executives, and other municipal politicians on a trade mission in an effort to exploit the Chinese market."

Yuchao Zhu, a political scientist at the University of Regina, said the conundrum, from China's viewpoint, is that the Chinese don't know what is in Mr. Harper's new China policy. "The Harper government seems to have simply left Sino-Canada relations out in the cold since last January," he said. "The political relationship seems to be at a definite low point."

pointed out that, among the other tensions and disputes between the two countries, is a report by Canadian lawyers David Matas and David Kilgour supporting a Falun Gong allegation that China executed thousands of prisoners for their internal organs.

According to a Reuters' report, last Wednesday, September 27, Canadian Foreign Minister MacKay denounced the current state of human rights and democracy under the CCP. The report said that the comments by the Foreign Minister were among the bluntest Canada has made about Beijing since the right-wing Conservatives won a federal election in January.

Reuters reported that MacKay said that they are reexamining the policy of giving aid to China, but that Canada can still make a contribution to helping China develop democratic institutions.

In June, Prime Minister Stephen Harper told his Japanese counterpart that China was a challenge the two countries should work together to tackle.

On September 26, eight Canadian MPs participated in the rally on Parliament Hill, voicing their support for Falun Gong practitioners and condemning the CCP's crimes against humanity by harvesting organs from living practitioners.