On October 13, Mainland Affairs Council Chairman Joseph Wu met with David Kilgour and David Matas, who co-authored the "Report into Allegations of Organ Harvesting of Falun Gong Practitioners in China", and Wang Wenyi, a Chinese pathologist. Mr. Matas said he hopes that Taiwan will ban organ exchanges with China and ban organ transplants using organs from China. Mr. Wu said that the MAC will coordinate with other government agencies and international human rights organizations and Taiwan human rights groups to do what is necessary. 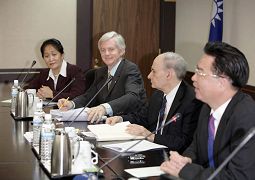 Before this meeting, the former Canadian Secretary of State for the Asia-Pacific region and senior member of Parliament David Kilgour and international human rights lawyer David Matas had visited the Taiwan Department of Health and Bureau of Information. Joseph Wu said that Taiwan is not only concerned about organ harvesting in China but is also worried about other human rights issues such as the treatment of rights activists, arrests of human rights lawyers and a purge of Muslims and Christians. He pointed out that the human rights situation in Mainland is far from the standard of a free society.

Wu said that the persecution and the atrocities of harvesting organs require attention from the whole world and Taiwan must work with other countries to improve human rights in China.

David Kilgour said that he and Matas had tried to enter China in May to investigate the organ harvesting claims, but they were denied entry by the Beijing authorities. Then, Chinese human rights lawyer Gao Zhicheng, who invited them to visit China to investigate the claims, was arrested and indicted by the Chinese authorities on charges of "sedition to overthrow the government" recently. In fact, Mr. Gao was only calling for the Chinese authorities to uphold freedom, human rights and the rule of law in China.

Mr. Matas said that while harvesting organs is reportedly guided by the Chinese government, demands for the organs come from around the world, including Taiwan. To end this practice, it must be done from the justice side and from the demand side as well. Matas said he is glad that Taiwan has been active in this regard. He hoped that Taiwan will ban organ exchanges with China and ban organ transplants using organs from China. He expressed hope that the Taiwan authorities will warn the Taiwan people about traveling to China for organ transplants.

In response, Mr. Wu said that all these requests are practical and the MAC will coordinate with other government agencies and international human rights organizations and Taiwanese human rights groups to do what is necessary.

In the end, Mr. Kilgour added that the communist regime has totally denied the accusations of organ harvesting from executed Falun Gong practitioners because China is preparing to host the 2008 Olympic Games. Ironically, he said, if people search the Google search engine for China's denials by typing in the keywords "China denied, " they will get more than 8.2 million entries.

No Financial Aid to Falun Gong

At the meeting, a reporter asked if the MAC has provided financial or other forms of aid to Falun Gong. Joseph Wu said firmly: No.

Ever since the Chinese Communist Regime started to persecute Falun Gong in July 1999, it has repeatedly claimed that Falun Gong has received financial aid from the American and Taiwan governments. The public also has doubts on this issue.

Mr. Wu stated that a major difference between Mainland China and Taiwan is that Falun Gong can be practiced freely without restriction while it is persecuted in Mainland.

Wu said that he has had frequent contact with Falun Gong practitioners for work reasons and many people around him are also practicing Falun Gong. All these show the freedom in Taiwan.

Mr. Kilgour said that he knows that there are practitioners in more than 80 countries around the world and they are all peaceful and nonviolent. He said that he has high respect for these practitioners and he and Mr. Matas conducted the investigation voluntarily.