(Clearwisdom.net) On September 26, 2005, at 6-8 p.m., a benefit concert for rescuing Falun Gong orphans was held on Union Square in downtown Manhattan. The concert was sponsored by non-governmental organization "Global Rescue of Persecuted Falun Gong Practitioners in China," and performed by the Tian Jiao Art Troupe. The performance was pure, fresh and touching, like a clear stream quietly flowing into the heart of this bustling metropolis.

Union Square is located at a traffic hub of Manhattan, and since it was rush hour, pedestrian traffic was very heavy. A huge banner with white words in a blue background reading "Help Rescue Persecuted Falun Gong Orphans" was set up behind the performers. In the front there were over a dozen large display boards depicting Falun Gong practitioners and their young children who have suffered persecution at the hands of the CCP. At the periphery of the square, there were photos telling touching stories about Falun Gong practitioners who believe in "Truthfulness-Compassion-Forbearance" and their children, who are suffering brutal persecution imposed upon them by the authorities in China. 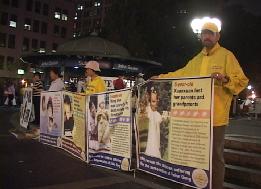 Singer Michael Feltz arrived to attend the benefit concert. Between songs, his words touched everyone's heart: "I just had a conversation with a lady who came from China. I asked her, 'The CCP so brutally persecutes Falun Gong, do they (Falun Gong practitioners) still practice?' The lady replied to me, 'Yes, they continue practicing.' I asked her again, "Why?' She said, 'Because they know the truth and what is right.'" Yes, people who have truly come to know the truth will not succumb to brutality. The truth will ultimately dispel darkness and illuminate the human world.

Under the lights, the Tian Jiao Art Troupe performed the dance "Pure Lotuses in Chaotic Times." People came over from all directions, quietly standing there to appreciate the performance. The performers, who were dressed in pure white clothes and carried pink fans, danced elegantly. Everything else seemed to become still. The music and dancing drew people's attention, who also took note of the banner and display boards that exposed the persecution.

The Tian Jiao Art Troupe also presented the audience with a song named "Coming for You" in both Chinese and English, and demonstrated the Falun Gong exercises at the end of the performance.

There were also some Chinese people passing by the square. One of them watched the performance from beginning to end, and he was visibly touched.

People took leaflets for rescuing orphans and carefully looked at the display boards. They will not easily forget this evening, amidst an intermittent drizzle, as the touching performance stirred the their sense of justice and conscience.

“Germany: The Hamme Festival Becomes a Showcase for Falun Gong and the Situation in China (Photos)”