Switzerland: Introducing Falun Gong and Exposing the Persecution in the City of Thun (Photos)

On August 7, 2005, Swiss Falun Gong practitioners held an activity to promote Falun Gong in the famous tourist city of Thun. Following the sound of traditional Chinese music, we found the Falun Gong booth. Practitioners demonstrated the five sets of Falun Gong exercises and people stopped to watch. Some sighed and said, "This music is so wonderful. It's like music from heaven." However, when people saw the display boards disclosing how Falun Gong practitioners are being cruelly tortured in China, they were shocked. Some said, "This is terrible. It's horrible. Such miserable things happen today in the 21st century. Is this real?" Our fellow practitioners said, "These are practitioners being persecuted whose names and home addresses we know. What these facts disclose is only the tip of the iceberg. There remains a great number of persecutions hidden from the public knowledge."

People learn about the persecution facts

Through the practitioners' careful explanations about Falun Gong and the persecution, people gradually came to understand the situation and asked for informational leaflets. They signed their names to help rescue practitioners persecuted in China. Some asked about where the exercise sites were and said that they'd like to learn to practice Falun Gong.

"I'm touched by your patience"

Two middle-aged women at first did not understand Falun Gong and said something bad about it. When fellow practitioners explained it in more depth to them, they said that they did not understand China and they were not interested, either. They did not sign their names to help the rescue efforts and did not take any leaflets. But they did not leave, either. The practitioners believed that these women were truly nice people and the reason why they acted this way was because they did not understand Falun Gong. So, a practitioner said, "Could you patiently listen to me about Falun Gong?" The women did not say a word. Our fellow practitioner started to talk about how Falun Gong cures illness and make people healthier, and how Falun Gong raises people's morality. Falun Gong teaches "Truthfulness, Compassion, and Tolerance." Whenever something happens, practitioners look inward and try to be kind and think of others first. As these two ladies began to listen, they asked, "Do you feel tired when practicing Falun Gong?" The practitioner pointed at those who weredemonstrating the five sets of exercises, who clearly looked peaceful and relaxed. The two women nodded their heads and said, "Falun Gong is a good thing. But why is the Chinese Communist Party persecuting Falun Gong?" The practitioner pointed at Jiang Zemin's photo and said, "The former Chinese Head of State was terrified when he saw so many people practicing Falun Gong. So, he ordered the persecution. Various propaganda tools, such as TV stations, newspapers, etc, were used to make up negative stories about Falun Gong; and a large-scale, nationwide arrest campaign started. Currently, the number of Falun Gong practitioners persecuted to death is 2,739."

By this time, a lot more people had come to listen to the introduction about Falun Gong. The two ladies said, "The ex-President is a bad guy. How can we help you?" A practitioner said, "Please sign your names to rescue the mother of the student studying in Switzerland. She was put in jail only because she is a Falun Gong practitioner and because she wants to be a good person." Everyone present signed their names. The two ladies gave their thanks again and again to our practitioner for such a detailed introduction. They said, "Your patience makes us feel touched, which enables us to truly understand Falun Gong. It is our first time to meet such a group of nice people. Falun Gong is magnificent. You are magnificent." Our practitioner responded, "It is Falun Gong that is magnificent. Please remember that Falun Gong is good! Truthfulness, Compassion, and Tolerance is good!" 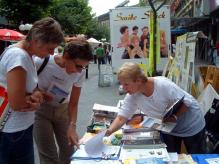 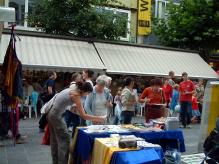 A few families came together to sign their names to support Falun Gong on this particular day. One family, with both elderly and young members, came to the Falun Gong booth and said to the practitioners, "Finally we found you. We were all in tears watching the informational VCD about Falun Gong. It is so miserable, what is happening in China. So many nice people are cruelly killed. What a wonderful practice being persecuted by the Chinese Communist Party. There are no human rights in China. It is hard to accept that there is no freedom of belief. Every one of our family members feels they want to help Falun Gong. Please let us know how we can help you." A practitioner said, "Please sign to support the rescue of the mother whose child is studying in Switzerland. Please tell your friends and family the truth about Falun Gong and appeal to people to help stop the Chinese authorities' persecuting Falun Gong. This is the greatest help to us." They all agreed, and the whole family signed the petition. They expressed their best wishes to Falun Gong and wished Falun Gong success.

A middle-aged woman was seen around our booth several times. A practitioner went to tell her about Falun Gong. She said, "I know that all those practicing Falun Gong are nice, honest people. The Chinese Communist Party loves to humiliate people. We farmers are no exception. The Communist Party occupied the farms by force and ordered over a hundred policemen to suppress those who resisted. When farmers go to meet with the higher authorities in Beijing, they are abused and sent to prison by policemen."

She also mentioned that she was in Beijing when the so-called self-immolation at Tiananmen Square happened. Some Falun Gong practitioners told her that it was made up by the Jiang regime to slander Falun Gong. She said, "The Chinese Communist Party is crazy. You Falun Gong practitioners are great to endure such suppression and to persist in your belief of Truthfulness, Compassion, and Tolerance. I admire you. Please give me some Chinese informational materials." Before she left, she also said, "I hope to see that you hold out until the last minute. Victory will definitely come your way."

After a long day, though the practitioners were tired, everyone felt happy from the bottom of their heart to see so many people learn the truth about Falun Gong.

“United Kingdom: Practitioners Demonstrate the Falun Gong Exercises and Raise Awareness of the Persecution at the Start of the Edinburgh Fringe Festival (Photos)”