MINNEAPOLIS - The value of the Nine Commentaries on the Communist Party was highlighted when it was honored with a National Journalism Award in the category, Asian American Issues - Online by the Asian American Journalists Association (AAJA) on Thursday, August, 18, 2005. 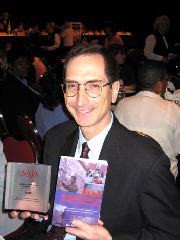 The Nine Commentaries on the Communist Party

Journalists from more than 1,000 newspapers, journals, television stations, radio stations and networks attended the grand occasion. This year, eleven awards were given in four categories including newspaper, online, broadcasting and TV reporting. Among more than 100 entries, the Nine Commentaries on the Communist Party published by the Epoch Times won top honors in the category "Asian American Issues - Online."

The author or authors of the Nine Commentaries must remain anonymous--their lives and their families' lives would be in danger if their identities were known by the Chinese Communist Party (CCP). In their place, Epoch Times editor John Nania had been nominated for the award. In Minneapolis, he accepted the award on behalf of the Epoch Times, and took the stage along with approximately eight other winners.

The featured speaker at the awards luncheon was Walter Mondale, former U.S. Vice President and former ambassador to Japan. Mr. Nania had an opportunity to chat briefly with Mr. Mondale, who accepted a copy of the Nine Commentaries with interest. "I'll read this!" Mr. Mondale replied. 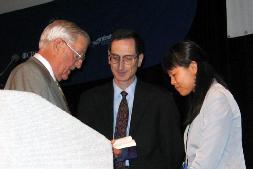 Representatives from the Epoch Times introducing the Nine Commentaries on the Communist Party to former U.S. Vice President Walter Mondale.

The 2005 AAJA convention had abundant programs including more than 50 special topic discussions, career service, individual assistance, and social gatherings. Discussion involved topics on practical issues faced by Asians in the U.S., the American media's view on Asian Americans, news reports on the tsunami in Southeast Asia, as well as ethics in media work.

The Nine Commentaries is a series of essays revealing--for the first time--the full, shocking history of the Chinese Communist Party. The Nine Commentaries was first published in Chinese in the Epoch Times newspaper in November 2004. It was then translated into English and posted on the Internet and put in print. Now it is available in 20 languages. Since its publication, the series of essays aroused broad attention and up to the present, more than 3.8 million people have peacefully and publicly resigned their membership in the CCP and associated organizations, with a daily average of 20,000 to 30,000 resignations.

Award winners of the 2005 AAJA Convention

“Switzerland: Introducing Falun Gong and Exposing the Persecution in the City of Thun (Photos)”

“Houston Chronicle: Falun Gong speak for those in China who 'are not seen'”