From June 6-10, 2005, Falun Gong practitioners in the San Francisco area held the "Truthfulness-Compassion-Forbearance" art exhibition in the exhibit hall on the second floor of the San Francisco Federal Building. On the morning of June 6, before the art works were completely set up, many staff members passing by were already very interested in viewing the paintings. Some expressed their appreciation of the art works and wanted to buy some of them. Some sighed after learning that the persecution is so cruel. Some expressed their wishes to learn more about Falun Gong. And some extended their gratefulness to the practitioners for bringing the "Truthfulness-Compassion-Forbearance" art exhibition to the Federal Building.

Thirty-six art works created by artists who practice Falun Gong from across the world were exhibited. The paintings manifested the peace and beauty brought by the cultivation of Falun Gong. In addition, the paintings also depicted various brutal methods of torture used against Falun Gong practitioners in China, as well as practitioners' worldwide peaceful appeals calling for an end to the persecution. They urged bringing the chief perpetrator, Jiang Zemin, to justice.

After viewing some of the paintings, a middle-aged western woman expressed her appreciation of the works and asked if the exhibition is held at other places. She was amazed that there are so many talented artists among Falun Gong practitioners. She said that she would come back to view the paintings later.

As soon as a worker in the building, saw the painting entitled, "Pure Lotus," she exclaimed, "It's so beautiful!" After viewing and admiring other paintings, she said that she most liked "Pure Lotus" and wanted to buy it. She said that she enjoyed doing meditation and felt very comfortable when viewing these works. "It would be wonderful if I could buy these two paintings and hang them in my room where I practice meditation," she said.

Some individuals said they considered the artworks depicting the brutal persecuting too graphic, and said that they did not feel good after viewing them. They became silent after learning that all these were real stories that actually occurred and are still taking place in China.

A federal investigator left her business card to practitioners after he viewed the paintings. She said that she is willing to help if needed.

Listed below are some of the messages left in the guestbook:

"This exhibition is great! It vividly reflected the persecution against those good people who uphold the truth. It's so wonderful! Thank you!"

"They are really masterpieces! They depicted people's pursuit of truth and wisdom as well as Falun Gong practitioners' determination in their belief."

"These art works can touch people's hearts and awaken people to help those persecuted people."

"I feel very lucky that I came here today to visit the exhibition."

"Thank you for holding the painting exhibition which allowed us to learn about the persecution those people suffered."

"Very touching! Thank you for the values rooted from China."

"These elegant paintings revealed the persecution that spread to the entire world."

"I feel very sad upon seeing innocent people being persecuted. I wish Truthfulness-Compassion-Forbearance will eventually prevail. The works are so beautiful."

"I'm so sad that I couldn't continue viewing them. I believe everyone should enjoy the right of spiritual belief. I don't understand to what extent they [the perpetrators] have been brainwashed that they could even perform such violence on these peaceful practitioners."

"The effect is tremendous and it's very touching. They even spend so much time and energy to attempt to move practitioners' peaceful beliefs. There will be one day the red wall will collapse. Falun Gong will enjoy the great honor."

"My 10-year-old child wanted to view and enjoy these paintings. I already viewed these works since I work here. Therefore, I went to the cafeteria. When I came back, my son told me, 'I viewed those paintings. It's so sorrowful.' I told him, 'Yeah, any discrimination is incorrect, but these are much beyond discriminations.'"

"I was immediately attracted by these beautiful paintings and the explanations underneath. I'm deeply touched by the content of the paintings. I could not help thinking of the significance and connotation behind the cultivation practice, which described the realm of Truthfulness, Compassion and Forbearance."

"Such striking contrast between the kind and the evil, such touching unyielding determination really moves me! Thank you!"

"Thank you for this exhibition which is so significant for education. I'll pray for the end to the persecution. Hope you will keep going and let us learn more. The art works are really outstanding." 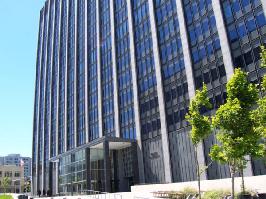 “Radio France Internationale: Chen Yonglin's Defection to Australia is due to his Opposition to China's Persecution of Falun Gong”