On June 11, Saturday 2005, Falun Gong practitioners were invited to participate in Brooklyn's "Flag Day Parade." The practitioners' waist drum troupe once again displayed their elegant demeanor and were warmly welcomed by local citizens.

The parade was held on a bustling commercial street in a multi-cultural, but primarily Spanish community. Some Chinese people reside nearby. The purpose of the "Flag Day Parade" is to recognize that people of different nationalities can live in peace and harmony together in the community and work together to make the community prosperous. 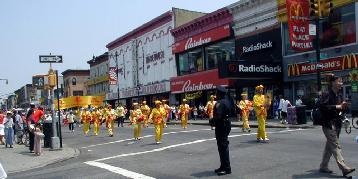 Holding a vertical banner with a Falun emblem, a young practitioner led the procession. The words above the emblem read, "Falun Dafa". The words on the left read, "Buddha Fa is boundless" and the words on the right read, "Falun is always rotating." A blue banner with the golden words, "Falun Dafa is good" in Chinese and English followed, after which came the waist drum troupe. A huge gold banner with the red words, "Truthfulness-Compassion-Forbearance" was at the end.

Although it was quite hot, the waist drum troupe was vigorous, as drumsticks flew up and down to the music of "Falun Dafa is Good" and "Joyful Celebration." Local residents and passersby stopped to watch. Many waited eagerly for the practitioners' procession. Some took pictures. Expressions of admiration could be seen on people's faces.

The practitioners' procession not only exhibited the unique Chinese culture to people of other nationalities, but more importantly, it brought the beauty of Falun Dafa to people here. Many people in the community took flyers to learn more about Falun Dafa.

There was another entry in the parade composed of Chinese people. The more than 10 senior citizens in this group represented the "Brooklyn Chinese Association." They seemed to walk with difficulty. They said that they were very tired and were unable to talk more with practitioners. Some practitioners in the procession were also in their 60s or 70s, with the eldest being 75 years old. They looked very healthy and energetic and they smiled happily. Carrying bags on their shoulders, it seemed that they could easily keep up with the young people. After the parade, they went to anti-torture exhibition sites to participate in other truth-clarifying activities. 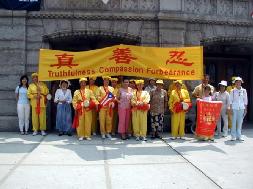 Miracles brought by Falun Dafa manifest at each moment. We sincerely hope that those Chinese people who are afraid of the Chinese Communist Party's cruel tyranny and don't want to face up to the facts, will be able to calmly learn the truth about Falun Gong.

After the parade concluded, the organizers expressed their thankfulness to participants, and then invited City Council Member Sara M. Gonzalez to give a speech. Council member Gonzalez stressed the significance of being united. She was pleased to take a group photos with the practitioners, and expressed that she would like to promote the practitioners' art exhibition in the city council.