US Congressman Recognizes World Falun Dafa Day as well as Practitioners and Founder Mr. Li Hongzhi for Their Courage and Perseverance [May 13, 2005]

(Clearwisdom.net) On May 13th, 2005, US Congressman Edolphus Towns, on behalf of the people of New York's Tenth Congressional district, presented a proclamation in recognition of the World Falun Dafa Celebration and Its Founder Mr. Li Hongzhi for Their Courage and Perseverance.

As being a Momentous Occasion for New York's Tenth Congressional District

, the universal principles of Falun Dafa, Truthfulness, Compassion, Forbearance are supported by kin-hearted people around the world and have helped hundreds of New Yorkers improve the quality of their lives; and,

, Falun Dafa promotes the cultivation of body, mind, and spirit through these principles, gentle exercises and meditation, bring its practitioners better health and higher moral standards since it was brought to he public in 1992 by Mr. Li Hongzhi; and

transcending the racial and cultural boundaries, Falun Dafa embraces people of all ages, from all walks of life and religious affiliation, and is practiced by over 100 million people in over 60 countries around the world; and

, That on behalf of the people of New York's Tenth Congressional district I am honored to recognize the World Falun Dafa Day Celebration and its founder Mr. Li Hongzhi for their courage and perseverance.

Signed on this day, the Thirteenth of May, Two Thousand and Five, 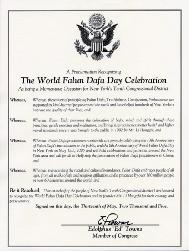