In the morning, posters and banners set up in front of Osaka Court

Parade in the rain after press conference

Japan: Practitioners in Kinki Support Lawsuit against Jiang and Call for the End of the Persecution (Photos)

(Clearwisdom.net) The U.S. Supreme Court will soon decide if it will review the lawsuit against former Chinese leader Jiang Zemin for genocide and torture. In order to bring Jiang to justice and to support the global lawsuits against Jiang, Falun Gong practitioners from the Kinki Region of Japan organized a one-day event in Osaka on April 10 2005. The event included public speeches and a petition drive in the most crowded area of Osaka. The event received support from other organizations. 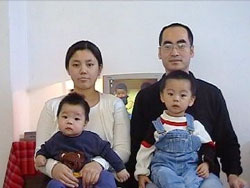 (Clearwisdom.net) On April 9, 2005, Falun Gong practitioners from the Ruhr district in Germany handed a letter to Mr. Schroeder, the German Premier, during an election activity. The letter called for the German Government to pay attention to the deportation of Jiang Renzheng, his wife Guo Rui and their two young children. After being sent back from Germany, Jiang Renzheng was taken away by the police on April 8 from his wife's family home in Shenyang and sentenced to forced labor for three years on that day. He is now detained in Liaoning Benxi Forced Labor Camp.