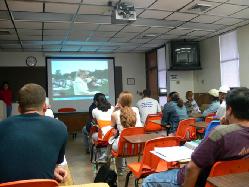 Falun Gong lecture in the classroom

In the spring of 2005, Falun Gong practitioners in Miami gave two Falun Gong workshops in Professor McKinney's classrooms. Her students learned about Falun Gong, its development in China and its spreading to the world, as well as the persecution in China. Ms. McKinney received positive feedback from the students. Some students often joined the group exercise practice.

Ms. McKinney mentioned one thing that happened to a student. The student had some problems with his leg so he couldn't walk smoothly. After 20 minutes of learning the exercises, he could run. So she believed these exercises are magical. She had her own religious faith but she is also reading the book Zhuan Falun and beginning to acquire a deeper understanding of Falun Gong. She wished that all her students could have some knowledge about it and be aware that such a pure belief is now persecuted at its origin by the Chinese Communist Party. 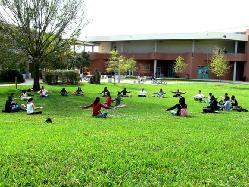 Students are learning the exercises on campus

In the fall of 2005, Professor McKinney taught four classes of about 30 students each in her religion course. All the students had a chance to learn the truth about Falun Gong. They asked all kinds of questions that showed they were serious and eager to learn the truth. They wanted to know how they could help to end the persecution. When the Falun Gong practitioners demonstrated the exercises, the students were excited and watched carefully. Many said it was beautiful and two students said they "felt the Falun spinning."

Professor McKinney has included the Falun Gong workshops in the long-term planning of her religion courses and discussed with Falun Gong practitioners about how to improve the teachings so that her students can learn the beauty of Falun Dafa.

Broward Community College awarded a certificate to the three practitioners who gave the workshop.