December 1, 2005 is the first day of the 11th month of the lunar calendar. Falun Gong practitioners went to the ancient Kwan-yin temple, which is quite renowned in Singapore, and clarified the truth to visitors. The temple attracts a great number of Chinese people from different areas and visitors. In particular, many older Chinese people come here to burn incense (to worship Buddha or Bodhisattva). It's a very busy place.

Some practitioners distributed truth-clarification materials, some explained the facts to passersby, and some demonstrated the Falun Gong exercises. Groups of people stopped, watched the demonstration, or viewed posters and listened to the explanation. After a while, other groups of people stopped and surrounded practitioners to listen to the truth clarification. Sometimes, the crowd was nearly one hundred people.

The older Chinese people here have very complicated connections and deep emotions for China. They are not quite clear that "the Chinese Communist Party is not equal to China." When they saw a banner that read, "Calling to Stop the Chinese Communist Party from Persecuting Falun Gong," they thought that it was against China and that was getting political. They often asked very probing questions. Sometimes, Falun Gong practitioners directly answered their questions, sometimes they answered the questions from different angles, but they always smiled and were not moved. Therefore, the situation was under very good control. Some people said with praise, "Falun Gong really has a good endurance." 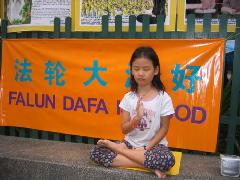 “Thoughts about the Benzene Poisoning of the Songhua River”