French photographer Yann Arthus-Bertrand was holding a photography exhibit entitled "Bird's-eye View on the World" on the sidewalk going from Liat Towers to Forum Galleria on Orchard Road. On November 6, 2005, after 1:00 p.m., Ms. Huang Chay Huay passed by while holding photo display boards with the words, "A call for the CCP to stop killing Falun Gong practitioners." The display also had some pictures and information exposing the torture and murder of Falun Gong practitioner Ms. Gao Rongrong. Ms. Huang noticed that Lee Kuan Yew was viewing the photo exhibit and was escorted by his bodyguards. One guard hinted that Ms. Huang should not speak. However, Ms. Huang told the guard, "You know Falun Gong is severely persecuted in China, and also receives unfair treatment in Singapore. Give me an opportunity, I want to speak to Senior Minister Lee." Ms. Huang then shouted out the words that had been in her heart for a long time, "You can't treat Falun Gong like this. You should treat Falun Gong fairly. The whole world is watching you." "Remember 'Falun Dafa is Great.'"

Lee Kuan Yew did not say anything and left. 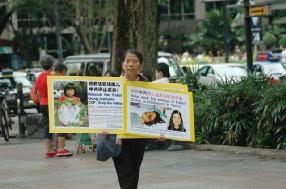 The display board Ms. Huang held at the time was the one about the persecution of Gao Rongrong

Ms. Huang said, "Since the CCP started the persecution of Falun Gong, in Singapore, Falun Gong practitioners' activities have been unreasonably restricted. The community centers have canceled practitioners' free instructions on Falun Gong to residents. Practitioners cannot get a permit to hold many activities. Regarding the MacRitchie Incident in 2000 and the Esplanade Park Case in 2004, in particular, I was a client in both cases. I feel I was unfairly treated, and Falun Gong was unfairly treated. In the past years, I have been writing to the government and Senior Minister Lee, and even requested to meet with the Senior Minister. Several days ago, I also wrote to the government, requesting redress for the MacRitchie case and the Esplanade Park case, because both cases were wrongly handled. I want to restore Falun Gong's reputation and retrieve the fines that were levied on me in both cases. Unexpectedly, I came across Senior Minister Lee today and spoke out those words from the bottom of my heart face to face with him. I feel that God arranged this opportunity for me."

In 1996, Falun Buddha Society (Singapore) was registered as a legitimate organization. This was the earliest among the Falun Dafa Associations registered outside of China. In 1999, the Chinese Communist Party (CCP) started the persecution of Falun Gong. At the time, the Singapore media republished in full a lot of the CCP's news attacking Falun Gong. In 2001, Lee Kuan Yew said in a media interview, "Falun Gong is a political group." In 2002, the Singapore government approved an unregistered group to hold a photo exhibit attacking Falun Gong. Some Falun Gong practitioners of Chinese nationality face difficulties in their lives simply because they practice Falun Gong. Some of them cannot get an Employment Pass. Some have had the duration of their visas shortened. Recently, police officers forcibly took a practitioner in her 70s to the police station simply for distributing Falun Gong flyers. A young Chinese couple, Mr. Zhang Zhaopei and his wife, both Falun Gong practitioners, could not get permanent resident status because they practice Falun Gong and clarified the truth to the public. Mr. Zhang could not even get an Employment Pass. Eventually they immigrated to Canada as refugees. The Singapore government once issued a scholarship to Mr. Zhang Zhaopei.

The MacRitchie Incident: On the evening of December 31, 2000, several dozen Falun Gong practitioners in Singapore held a candlelight vigil at the quiet MacRitchie Reservoir in memory of Falun Gong practitioners in China who had died as a result of persecution. The police sent out a large number of riot police, surrounded the practitioners and detained fifteen of them, charged them with "illegal assembly" and brought them to trial. Later, these practitioners were either sentenced to prison or fined. Afterwards, most of them were asked to leave Singapore. It is known that activities that constitute "illegal assembly" must have an element of violence, but that night, the atmosphere was sad and solemn, without any violence.

In April 2004, the Singapore police indicted Falun Gong practitioners who, on February 23, 2003, had done the Falun Gong exercises and clarified the truth about Dafa in Esplanade Park. They charged the practitioners with "Assembly without a Permit" and "Possession and Distribution of VCDs without a Certificate."

Practitioners did not accept the charges and asked an attorney to defend them in court. After a preliminary hearing, the judge announced that all charges would stand and imposed a large fine of S$20,000 and 24,000 respectively on both practitioners. The practitioners felt the verdict was unfair to them. On September 20, 2005, they appealed to the High Court of Singapore. The Falun Gong lawyer pointed out that in line with freedom of belief in the Singapore Constitution, citizens have the right to spread their beliefs, and even have the right to clarify when their beliefs are subjected to libel and slander.

The lawyer also pointed out that the fundamental material evidence provided by the police, a receipt for confiscating VCD, did not have his client's signature. Other witnesses and evidence were seriously insufficient. Moreover, five persons can constitute an assembly, but only two persons had charges brought against them. The Chief Justice did not answer the lawyer's questions. He cited purely political reasons such as "Our country is too small. We are powerless to influence a large country" "I won't let you off so easily next time." This is the persecution of Falun Gong practitioners. The practitioners expressed that they would defend themselves all the way to the court in The Hague.