In April 2000, Sun Yan's husband, Lu Kaili went to Beijing to appeal for Falun Gong and was illegally sentenced to one year of forced labor. He was held at the Masanjia Forced Labor Camp. Before his term expired, he was transferred to the Dalian Forced Labor Camp. Upon arriving at the Labor Camp in the afternoon, he was tortured by guards and inmates who tried to force him to give up Dafa. He endured the fanatic persecution, and the perpetrators unconstitutionally extended his sentence by six months. After he was released, he was followed and monitored.

Sun Yan was held at Division 3 at the Dalian Forced Labor Camp. She refused to "reform" and clarified the truth to the division head. She was held in solitary confinement and savagely tortured. Wan, the female division head shocked her with electric batons. Division head Han and political head Tan incited the inmates to beat her. They stripped her naked and rubbed a knotted rope back and forth against her genitals; blood dripped on the floor. They hung her in a metal cage, forced her legs apart and inserted hot peppers into her vagina. Yuan Lingyue, head of Group 3 beat Sun Yan and other Dafa practitioners many times. They tortured Sun Yan in the solitary confinement cell because she refused to write a guarantee statement to renounce Dafa.

In early 2002, many Dafa practitioners including Sun Yan held a group hunger strike to protest the persecution. The guards were furious and ordered the inmates to torture the practitioners with a method called "splitting the legs."

Splitting the legs: the practitioner is hung up. The inmates tie the top of a boxing helmet on the practitioner's head with a rope or strips of bed sheets, then to the top of the cage. The practitioner's hands and one leg are pulled up straight and chained or tied to the side of the cage, and the other leg is left hanging in the air. The inmates would pull on the other leg until it's 180 degree apart from the other leg. They would let go of the other leg when the practitioner loses consciousness, and repeat it when he or she comes to. While administering the torture, the inmates would ask the practitioner, "Will you reform?" and they screamed, "If you don't reform, we'll split your legs until they break!" The practitioner feels as if her body is split in two, and she often loses feelings in her legs or even loses consciousness. The inmates would say, "She can't feel anything now; let's wait for a moment and do this again." Some practitioners could not walk for weeks, a month or even six months after the torture. Practitioners Wang Lijun, Man Chunrong, Zhong Shujuan, Sun Yan, Wang Shuhong, Wang Binhua and Wan Xiaohui were tortured with "splitting the legs." Perpetrators Zhang Xiujuan, Gao Binling, Sun Bo, Guo Ling, Zhao Hui, Wang Xin, Ge Hong and Zhang Yang administered this torture. 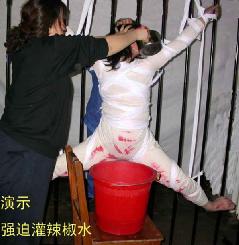 Sun Yan and Man Chunrong were tortured numerous times while holding hunger strikes and refusing to cooperate with the perpetrators. Sun Yan was hung in a cage for six days and six nights with her hands and feet stretched out in a straight line. The guards incited the inmates to insert hot pepper and powdered pepper into her vagina and stab her vagina with a mop handle. They hit her genitals with the edge of a chair until blood ran down her legs. They rubbed her genitals back and forth with a knotted coarse rope until her vagina hemorrhaged and swelled up. She could not urinate and was crippled for over a year. Her fingers were so deformed from torture she could not make a fist. Despite her condition, she was still forced to process kelp and meet the assigned daily quota.

Practitioner Chang Xuexia had her vagina repeatedly scrubbed with a shoe brush until the water in a basin underneath her turned red with blood. She lost consciousness. Practitioners Chen Hui, Fu Shuying, Man Chunrong, Wang Lijun, Fan Yue and others were also tortured this way.

In 2003, Sun Yan shouted, "Falun Dafa is Good" when officials from Liaoning Province Judicial Bureau went to the labor camp to inspect work. The guards and inmates dragged her to a solitary confinement cell and tortured her for more than ten days, until her feet were severely injured and she couldn't walk.

Sun Yan refused to give up her belief in Truth-Compassion-Forbearance. Group head Yuan Lingyue took her to a solitary confinement cell and tortured her with the Death Bed. They stretched her arms and legs to cause excruciating pain. They inserted hot pepper into her vagina and scrubbed her vagina with a shoe brush until she lost consciousness. Sun Yan's body often received new wounds on top of old ones. Her face was often black and blue when she was dragged out of the solitary confinement cell, and she was extremely weak. During more than two years at the labor camp, Sun Yan was crippled and she could not bend or stretch her fingers. The guards wrote Falun Gong founder's name on Sun Yan's body and insulted her with extremely vulgar language. They sent Sun Yan and two other practitioners to the Longshan Forced Labor Camp. Perpetrator Yuan Lingyue planned the transfer.

Sun Yan persisted in Truth-Compassion-Forbearance, despite the fanatic persecution, and the guards and inmates could not destroy her will. In the end, the guards extended Sun Yan's term by 50 days and sent her to the Guanshan Forced Labor Camp.

“Ms. Zhang Hua Is in Critical Condition as She Resists Persecution with Hunger Strike”