The following are photo reenactments of tortures suffered by Falun Gong practitioners in Jiamusi City Forced Labor Camp, Heilongjiang Province. The people in the photos are reenacting torture scenes based on descriptions by the victims.

Case 1: In February 2001, Doctors Zhang and Yang ordered several male prisoners and a prison guard surnamed Cui to force-feed me high concentrations of salt water. When I threw up they would force-feed me again.

Case 2: On November 21, 2001, I was arrested and sent to Jiamusi City Forced Labor Camp and my family was not notified by the authorities. In Jiamusi City Forced Labor Camp, once the guards caught me practicing the Falun Gong exercises. They first tortured me with the "fetter chair," then they put me on a wire mattress with my hands cuffed to the bed frame. As my body slipped down on the bed, my shoulders and arms were stretched and I experienced a piercing pain. 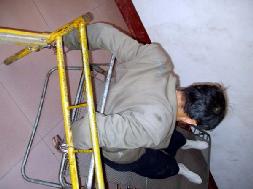 In Jiamusi City Forced Labor Camp, I was forced to sit on a small wire spool that had a sharp head like a blade. After I sat on it for some time, my buttocks were cut and the skin peeled off layer by layer. My skin stuck to my pants tightly and after I got up. It would then peel off and keep sticking to my pants. Once we were forced to pick beans. When I was exhausted and closed me eyes for just a second, the chief of the management division, Wang Jun (everyone called him "King of Hell"), saw me and shocked me with an electric baton. The electricity burned my skin and flesh. He forced me to sit on the "fetter chair" in an open area in the cold wind to freeze me.

Case 3: One day in January 2002, after one o'clock in the afternoon, one of the deputy captains, Zhang Yan, summoned me from my cell to the classroom. There, Captain Hong Wei slapped me in the face and verbally tried to provoke me. It did not work. Then Deputy Captain Li Xiujin handcuffed me to the heating radiator. To further humiliate me, he smudged Teacher's photo in front of me. Several "Reformed" practitioners kept trying to persuade me to write the "Guarantee Statement." I was kept handcuffed there until I lost consciousness. Deputy Captain Zhang Xiaodan ordered a guard to pull me to the men's team. 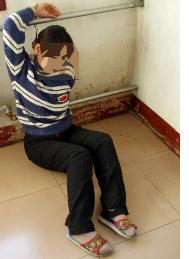 Case 4: On February 20, 2002, the more than 30 practitioners in the Eighth Division of Jiamusi City Forced Labor Camp requested to be released unconditionally. The labor camp authorities sent over 20 male and female guards to beat and kick us. Twenty-two practitioners were handcuffed in the "Carrying a Sword on the Back" (1) position to the side of the beds and were shocked with electric batons. Even a 69-year-old senior citizen was treated this way. The electric shocks resulted in many blisters the size of grapes on our faces. Some practitioners were shocked until they lost control of their bowels. The guards laughed upon seeing this 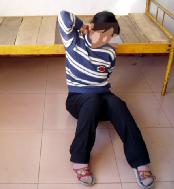 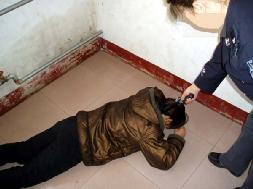 Case 5: One morning in July 2002, many practitioners resisted the so-called morning exercise with peaceful disobedience. Guards He Qiang and Mu Zhenjuan directed other guards to drag us to the conference room while beating and cursing us along the way. They then took us one by one to an office room and interrogated and beat us. I was pulled to the second floor and handcuffed by Zhang Xiaodan to an iron bed frame in the position of "Flying an Airplane" (2). My arms were restricted to the bedside and my hands swelled up like a couple of loaves of bread. I was forced to stay in the same position from about 6 o'clock in the morning until after 8 in the evening. 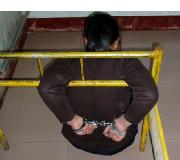 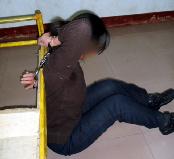 On October 26, 2002, the Jiamusi City Forced Labor Camp authorities tried to force practitioners to write the "Three Statements" to give up practicing Falun Gong. Around 8 o'clock in the evening, guard Sun Limin shackled me with my hands behind my back to an iron bed frame and only released me once later in the night to use the toilet. Around noon the next day, two male guards came and wanted to take me to the male team for further persecution. Sun Limin, Li Xiujin, Zhang Xiaodan, Zhou Jiahui and 3 to 4 "reformed" practitioners tried to force me to write the "Three Statements" by intimidation and deception. When I refused, they handcuffed me in the "Carrying a Sword in the Back" position until after 9 o'clock in the evening.

In early 2003, the Jiamusi City Forced Labor Camp tried to make practitioners write statements renouncing Falun Gong. On March 5, guard Hong Wei led 3 to 4 "reformed" practitioners and other guards to handcuff me in the "Carrying a Sword in the Back" position. My arms were twisted and locked to an iron bed frame. The handcuffs cut into my flesh and my hands again swelled to the size of bread loaves and turned blue and purple. At this point, they would release the handcuffs while lifting and pulling intentionally to inflict more pain. Then they tried to force me to write the statements, and handcuffed me again when I refused. This occurred several times. Finally when the handcuffs were released, the bones of my wrists were exposed due to the handcuffs cutting into my flesh. On March 7, when Zhang Yan was on duty, they again tried to force practitioners to write statements to renounce Falun Gong. One of the practitioners resisted and was beaten by the inmates. When I asked them to stop the beating, I was again handcuffed in the "Carrying a Sword in the Back" position.

(1) "Carrying a Sword on the Back" -- The practitioner's hands are tied behind his or her back with one hand over the shoulder and the other hand pulled up from the lower back. The guard then applies a great deal of force to pull the two hands toward one another and then handcuffs the two hands together.

(2) "Flying an Airplane" -- A practitioner is forced to stand with his or her back against the wall (of the bed in this case), the head dropped forward, and both hands pulled up from behind.

“Turned Out Into the Cold: The Situation of Children Orphaned as a Result of the Persecution of Falun Gong (Photos)”