Canada: Chinese Embassy Refuses to Renew My Chinese Passport, Labeling Me "A Dissident of the Chinese Government" Because I Practice Falun Gong (Photo)

(Clearwisdom.net) My name is Xiong Jun. I am a Chinese Falun Gong practitioner married to a Canadian man and residing in Toronto, Canada. The Chinese Consulate in Toronto put me on the list of "political dissidents" because I practice Falun Gong. I discovered this fact in September 2002 when I tried to renew my Chinese passport. The consulate took the opportunity to threaten me to renounce Falun Gong in exchange for the renewal of my passport. When I firmly refused to give in to their demand, they deprived me of my civil rights as a Chinese citizen to have a valid Chinese passport. Since then, I became a Chinese citizen residing outside China but without a valid Chinese passport.

Around 11:30 a.m. on September 13, 2002, I arrived at the Chinese Consulate in Toronto and applied for the extension of my passport. The staff at the consulate gave me a receipt and asked me to return after 3:00 p.m. to pick up my renewed passport.

Around noon that day, I received a phone call. The caller did not say anything, but I heard him speaking to someone else, "She probably went out to practice Falun Gong again." Then the caller hung up the phone. I recognized from the voice that the caller was the man giving me the receipt at the consulate.

Two minutes later, the same man called me again. This time he spoke to me, "There is no need for you to come to the consulate this afternoon because your passport is not ready yet. We have encountered technical difficulties with our machine. We will call you when we have completed your application." I asked him, "When do you expect to finish my application?" "It's difficult to say. Just wait for our call."

Two weeks later, I went to the consulate accompanied by my immigration attorney. The receptionist at the consulate refused to speak English. Clearly she did not want to speak to my attorney. My attorney asked the receptionist in English (paraphrasing): "Exactly what type of problem are you experiencing? How much longer do we need to wait to get a renewed passport? Why are you delaying the process of her passport renewal application?" The receptionist refused to acknowledge the attorney and told me in Chinese, "You should not bring an attorney here. You should resolve this problem on your own. You must wait. You must wait for news from China."

I left China for Belgium and then moved from Belgium to Canada. I have never violated any laws inside or outside of China. The Chinese Consulate has no right to deprive me of my right as a Chinese citizen to have a valid Chinese passport to travel outside China. Then I remembered the first phone call I received from the consulate. How did they know that I practice Falun Gong when I applied for the renewal of my passport? I imagine that they must have collected my name through their overseas network of intelligence. The Chinese embassies and consulates around the world have been helping to compile a list of Falun Gong practitioners outside of China and to persecute them.

I am ashamed of my own government for their behavior. My husband Joel Chipkar and I both feel that the Canadian government ought to safeguard her dignity and principles by preserving the human rights on Canadian soil. I would like to ask everyone in Canada to stand up and protest the Jiang Zemin regime's violations of Falun Gong practitioners' human rights to make it clear to Jiang Zemin's regime that they cannot violate the Chinese and international laws or conduct depraving business on Canadian soil and hope to get away with it. 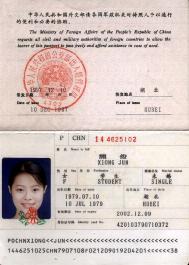