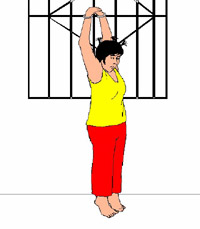 Explanation of the illustration:

In July 2000, Qiu Cuixiang, from Chongqing City, was illegally sentenced to one year of forced labor. She escaped using the power of her righteous thoughts, and since then, she has lived in exile to avoid further persecution. In May 2001, police abducted her again and once again put her in a forced labor camp. Two camp policemen wearing steel helmets tied her up with ropes after kicking and beating her. They taped her mouth shut and dragged her to a field to expose her to the elements. They then stomped on her back and shoulders. Qiu Cuixiang lost consciousness on the spot. The police then dragged the unconscious Qiu Cuixiang through every division and every team, exposing her like that for several hours.

After Qiu Cuixiang was dragged back to her division, she was unconscious for an unknown period of time. The policewomen, led by Yang Ming, cut Qiu Cuixiang's hair short and bundled her hair into several clusters to humiliate her. They tried to force her to give up the practice of Falun Dafa. They handcuffed her and hung her from an office window metal railing. Her whole body was suspended in the air with only her big toes touching the ground. They also deprived her of sleep around the clock for 30 days.