Torture Method No.1: Crushing with Large Baskets Full of Stones

Torture Method No. 2: Brushing Wounds with Alcohol and Vinegar

After the practitioner was injured this way, several inmates pressed him to the ground and poured alcohol and vinegar on his wounds. The torturers fiendishly brushed the wounds with toothbrushes, causing the wounds on the exterior of the neck vertebra to become infected. The guards still forced the practitioner to carry baskets of stones. The wounds didn't heal until two to three months later, and after they healed, there were still a few lacerations left that resembled a tumor.

Torture Method No. 3: Carrying Stones on the Back

Practitioners were forced to carry two large baskets full of stones and run forward. If one was a bit slow, the inmate behind him would use a wicker to violently whip him. It was in the hot summer, and the practitioners were not given any water to drink the whole day. 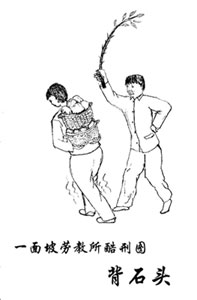 Carrying two large baskets full of stones on the back

The criminal inmates force the practitioner to bend his head down as far as it can go below a bed, and his two arms are lifted backward and upward. The practitioner is forced to hold this position. The inmate then violently kicks his buttocks and pushes the practitioner farther under the bed.