Many torture techniques are used. Practitioners are shocked with multiple high-voltage electric batons and beaten with metal bars, wooden sticks, table legs, bed boards, and leather belts. Such treatment resulted in the death of practitioner Mr. Liu Shuchun. In his forties, he was from Changyi City. In the cold of winter, they soak practitioners in a large tub of water for long periods of time, dunking their heads under water to almost drown them, hanging practitioners upside down and then dipping their heads in the water until they choke. In winter, they drag practitioners to the bathroom, pouring cold water onto their bare bodies, then opening the windows or turning on electric fans. They tightly squeeze practitioners' private parts or whip their private parts with rulers or wooden boards, making the whole area swollen. They flick practitioners eye balls, whip their eyes with wet towels, burn practitioners' flesh with electric irons, use pliers to pinch the flesh, poke needles in the thighs and use scissor tips to scratch the bottoms of their feet. They turn tables upside down to use as a Tiger Bench; hang practitioners by their handcuffs; tie them up with ropes or tape; force them to sit with their legs straight for a long time, both hands holding their toes, while the police sit on the practitioners' heads or shoulders, severely injuring practitioners' backs. They deprive practitioners of sleep for days at a time; inject them with nerve-damaging drugs; restrict their access to a toilet; make practitioners soil their pants; force them to do innumerable squats; force them to do exercises, march or do aerobics in hot weather; and intentionally get them sunburned by requiring them to do heavy labor for up to 15 hours per day.

Below are photo illustrations based on victims' descriptions and acted out by practitioners.

Using upside down tables they tie up practitioners using it as a "Tiger Bench." The knees are tied up tight, hands taped together to the toes, and then the feet and buttocks are raised with two folding stools causing the bones to feel like they are cracking. Practitioner Mr. Jiang Guobo was tortured like this for an entire day. 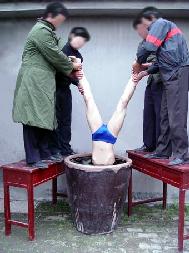 In the cold winter of 2000, in order to brainwash more practitioners, four prisoners stripped one practitioner at a time and carried him to the bathroom, where they held him upside down and lowered him headfirst into the water for several minutes. They would pull the victim up and ask if he would cooperate with the brainwashing. If the answer was, "No," they would dunk him headfirst into the water again. Mr. Yao Hexing passed out while being tortured like this. It took him a long time to regain consciousness.

In the winter of 2000, in an attempt to coerce more practitioners into renouncing Falun Gong, four prisoners stripped one practitioner at a time, dragged him to the bathroom, and dunked his head in a large basin of water for several minutes. Then they'd pull his head out and ask if he would cooperate with the brainwashing. If he refused, they dunk his head in the water again.

In the cold winter of 2000, in order to brainwash more practitioners, four prisoners stripped one practitioner at a time and manhandled him to the bathroom. Then they taped up his hands and feet and set him into the large, full water basin, allowing only his head to remain above the surface of the water. Then they used a high-pressure water hose to spray directly into his nose and mouth for more than ten minutes to force him to accept the brainwashing.

In the cold winter of 2000, in order to brainwash more practitioners, 4 prisoners stripped 1 practitioner, carried him to the bathroom, they taped up his hands and feet, soaked him in the large water basin, allowing his head to remain on the surface, then they'd dunk his head in the water for several minutes, until he was forced to accept the brainwashing.

In the cold winter of 2000, four prisoners stripped one practitioner at a time, carried him to the bathroom, taped up his hands and feet, put him inside a large laundry bag, and then submerged him in the large water basin for several minutes, until he was forced to accept the brainwashing.

In the cold winter of 2000, in order to brainwash more practitioners, seven to eight prisoners stripped one practitioner at a time, carried him to the bathroom and held him on the floor. Four or five prisoners held down the practitioner's head, arms, and legs, then sprayed him in the face a with high-pressure water hose and poured buckets of water on him. Mr. Jiang Guobo passed out from this treatment. (There were more than ten prisoners inside the bathroom. We had to take the photo in the yard.)

In the cold winter of 2000, four prisoners stripped one practitioner at a time and carried him to the bathroom. Then they taped up his hands and feet, put him inside a large laundry bag, and submerged him in the large water basin.

"Arching the feet": In this torture practitioners must sit on the floor with both legs straight, both hands holding the toes, or they would be beaten. Sometimes the hands are taped to the toes. 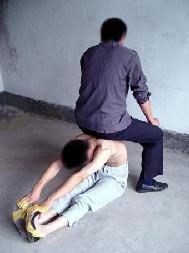 Practitioners are forced to sit on the floor with both legs straight, their hands holding their toes. Sometimes their tormentors will sit on the practitioners' heads and shoulders, which resulted in serious injury to Mr. Cao Kechang's lower back. 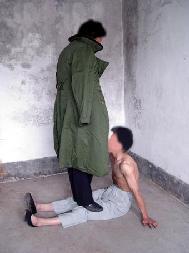 Practitioners are forced to sit on the floor with both legs straight and their hands holding their toes. Sometimes the perpetrators will stand on practitioner's knees. This treatment injured Mr. Jiang Guobo and Mr. Yao Hexing's knees.

Practitioners are forced to squat with their hands cuffed. Their upper and lower legs are tied with towels, and theirs hands are tied around the ankles. This position does not look that bad, but it is very painful after a long period of time. Especially when being pressed down on by thugs, the part behind the knee is extremely painful. Sometimes practitioners were forced to remain in this position for more than 30 days, and they were not allowed to sleep This torture method made Mr. Zhan Haigang's face turn a purple, blackish color.

Sometimes practitioners are deprived of sleep for more than 30 days. If practitioners even close their eyes slightly, the villains would slap their faces, punch them, pull their ears, flick their eyes, or plug their noses.

“An Appeal By Practitioner Ms. Wei Jianyu from the Fujian Engineering Institute, Who Continues to Suffer Persecution after Four Years in Prison ”