(Clearwisdom.net) The parents of Li Hong, Li Liang, and Yi Ying used to serve in the Chinese Military Secret Service, and were happy that they made contributions to their country. 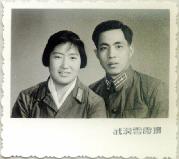 After the parents began practicing Falun Gong in 1994, all of their illnesses disappeared and they looked much younger. The father, who used to need help walking, is now able to take care of his grandson. The mother is in her 60s but can walk briskly with no problems.

In October 1999, the son, Li Liang, wrote an appeal letter to the government and was arrested and sentenced to one-and-a-half years of forced labor. He was held at the Shuangkou Forced Labor Camp in Tianjin.

The family went to all of the police departments in Tianjin numerous times and eventually found out where their son was being held. They went to the labor camp after a bus trip that took over two hours, but the labor camp authorities refused to let them see their son, because he refused to give up his belief in Truth-Compassion-Tolerance. They went every month but were always rejected. They don't know what their son is being subjected to. Every time they hear that the guards have beaten someone to death, their hearts stop because they are afraid their son will be next.

Their eldest daughter was deprived of her freedom during the Chinese New Year, simply because she persisted in her Falun Gong practice. They authorities sentenced her to several years of forced labor.

Their son and daughter were taken away from them, and their grandson cried for his mother. Their younger daughter was busy working in Shanghai. The only option she had was to call them on the phone. When they didn't receive a phone call from their daughter for several days, they would worry that she was also arrested.

Their younger daughter said she would come home during the 2001 Chinese New Year. When the mother went to the train station to pick her daughter up, she was surprised that nobody showed up. She called her home in Shanghai but no one answered, and her cell phone was turned off. It was during a holiday so her work unit phone was not answered, either. The mother could not take the sudden shock and her hair turned white. The father sat on the couch stunned and full of worry.

They spent a Chinese New Year without the company of their children, accompanied only by their own tears.

Their younger daughter's birthday is on January 15. They bought a cake but no one ate it. They hoped they would hear from her. Eventually, they learned she was illegally sent to the Shanghai City Brainwashing Center to force her to give up her belief.

They knew nothing about their children's condition in the labor camp or the brainwashing center, but they believed their children had done nothing wrong, because there is nothing wrong with believing in Truth, Compassion, Tolerance and being a good person. The mother, who is in her 60s, was sent to a detention center. When she was released one month later, the perpetrators demanded that she sign a document, saying that she would not be released if she didn't sign it. She reluctantly signed her name because she was worried about her husband and her three incarcerated children.

The younger daughter again accompanied the parents to the labor camp and tried to visit her brother, but they were turned away.

Several days after the younger daughter returned to Shanghai, she was arrested on a work errand, again because of her belief in Truth, Compassion, Tolerance. She was held for two years. Her husband arrived in Tianjin from Australia to visit his parents and wife in Shanghai, but was deported.

The mother went to Shanghai by train on a hard-seat. Before she could find a place to stay, she went to the labor camp on a bus but wasn't allowed to see her daughter. She returned to Tianjin disappointed and full of worry.

In March 2002, six months after her arrest, the mother saw her younger daughter for the first time. She held back her tears. The mother was not allowed to hug her daughter.

Before the Chinese New Year 2003, the father cooked up a feast and the grandson waited for his mother, but what they received was a statement, stating that their elder daughter was again arrested and sentenced to two-and-a-half years of forced labor.

The parents now no longer trust sentence statements with red stamps on them. Their younger son was sentenced to one-and-a-half years of forced labor in October 1999. He was still not released four years later, in October 2003. They didn't know how long their elder daughter was going to be held.

Their grandson is now older and didn't shed tears in front of everyone. One night when the father tucked in the child, he saw that a large area of the child's pillow was soaked with tears. The grandparents went between Shanghai and Tianjin to visit their three illegally held children.

Their younger daughter was supposed to be released after the October 1, 2004 five-day holiday. After the holiday, the mother took a train to Shanghai. She spent one of the happiest periods of her life with her daughter at home. Their son-in-law called them and they learned that he went to many government agencies in the past two years to seek help. The Australian Department of Foreign Affairs intervened and eventually the Chinese government released his wife.

Although the mother does not want her daughter to leave, she said, "Get out of China so I will not have to worry about you, so you will not be arrested and held repeatedly like your elder sister and younger brother."

With help from the Australian government, their younger daughter successfully arrived in Australia, but she could no longer visit her parents. Her parents could not leave China, so they couldn't attend her wedding.

On May 22, 2004, their son was released after 56 months of detention. The grandson was so happy to see his uncle, he stuffed him with his favorite foods. The grandson followed his uncle everywhere.

Every month the old couple went to visit their elder daughter. They laughed because they knew it would not be long before they are re-united with their children.

They didn't expect that on October 2, 2004, six or seven police officers would break into their home and demand to know about their son's contacts, and who owned the book Zhuan Falun. The parents learned their son was again secretly arrested. No one told them why he was arrested or where he was being held. They called the police department, police station and the city police department but received no answer.

The father shook in anger and frustration, and the mother was overwhelmed with worry.

Both of their children are university graduates and they are eager to contribute to society. Instead, they are being held in labor camps and detention centers, and are being tortured. Their younger daughter was strapped to a metal door in the winter for three days and three nights until she lost the feeling in her arms; she was tied to a bed 14 hours a day, face up, and was force-fed. She was held in a solitary confinement cell for six months.

They don't know what their son went through, but they know a university student held in the same cell as their son died from torture. Their son didn't want to tell them about his suffering because he didn't want to upset them. He didn't want to return to the hellish place, the labor camp. Now that he was again arrested, there is no way to know what he is going through.

Kind-hearted people: please pick up the phone and support these innocent people who are being persecuted.

Perpetrators responsible for the persecution of Li Liang, 33 years old, are listed as follows:

Address: Inside No. 9 Heping Village Street

Huo Xiuling: person formerly in charge of Falun Gong; she is directly responsible for Li Liang's detention until May 2004. Now Li Xia is in charge of the persecution.