(Clearwisdom.net) Late in December 2000, we Falun Dafa practitioners detained in the Jinzhou District Detention Center went on a joint hunger strike to protest our unjustified detention. We refused to do forced labor and requested our unconditional release. Our action stunned the county police department and its director, Fan, who went to the detention center to find out who was leading the hunger strike.

They focused on two practitioners, Ms. Zhang Chunhua and Ms. Tan Shuyun who had gone to Beijing to peacefully appeal for Falun Gong and had been brought back by the police. A gang of police guards led by prison doctor Zhang Shuquan came to beat practitioners. Some policemen used their fists and feet while others hit practitioners in the face and head with rubber batons. When the batons hit you in the face, you could feel the flesh being ripped away. It was extremely painful. Some practitioners were bleeding from their eyes and could not see anything. Others became disfigured due to the beatings, and suffered from bruises all over. Then the police shackled the two practitioners who had been to Beijing and tortured them for three consecutive days. The shackles were designed to prevent people from lying down or eating. We were forced to hold one painful position for long time. The detention center also forced us to do heavy labor for 18-20 hours a day.

Zhang Shuquan, Ju Wenyang and Gao Qian were among the most vicious persecutors. Other policemen whose names we never learned were also involved. Wang Wenqi, the deputy director of the center was responsible for issuing the orders. In addition to the use of the rubber batons, another torture instrument called "running" was also used. It consisted of a square metal frame about 1 x 1 foot in dimension, with 4 handcuffs made of heavy steel at the four corners. Two are used to shackle the hands and the other two are for the feet. If one of the handcuffs moves, it will twist or pinch a practitioner's wrists and ankles, causing extreme pain. The practitioners had to bend over by almost 90 degrees when walking, with the hips up and face down. They were only able to look at the ground right in front of their feet. Every step taken was only about 3 inches at a time with their flesh twisted and it was very painful. (See illustration) 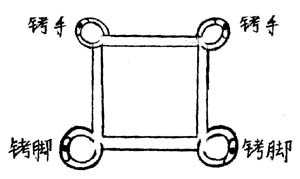 In early May 2001, I personally witnessed Dafa practitioners holding a Fa conference in Shahe Town, Jinzhou District. The police came and arrested many of them. On the next day, the head of the "610 Office" in Jinzhou District, Gao Mingxi, along with Liu Ying and two others whose names are unknown, interrogated the Dafa practitioners one by one. After the interrogation, the practitioners all had bruises and blisters on their faces that were swollen to the size of pumpkins. Ms. Qin Shumei, who is in her sixties, had two gashes on her face that were bleeding profusely due to beatings she received. Ms. Bi Jinlan's, Ms. Li Ling's and Ms. Wang Guixiang's eyes were swollen shut.

A heavenly principle states that good is rewarded with good and evil meets with evil. All those that have persecuted Dafa and practitioners will definitely receive their punishment as well as the judgment of morality and justice.

“The Charlatan (Canada): Fighting for Freedom of Belief”

“Editorial: On the Basis of Fa-Rectification Cultivation, Safeguard the Stable Operation of Materials Sites* and Internet Access Points in Mainland China”