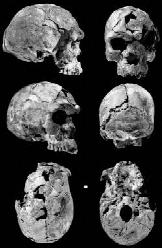 The journal Nature reported in June 2003 that the newly discovered fossils exhibit features that indicate great resemblances to modern man, including walking and various other behaviors. If the ancient people walked on the street, no one would recognize them as different from us.

The achaeological team, under the direction of Dr. Tim White from the University of California, found that the fossilized partial skulls dated 160,000 years old. They were found in what is today central Ethiopia, and include the skulls of two adults and one 6 or 7 year old child. The fossilized partial skulls look very similar to those of modern human beings. The facial character of the skulls looks almost same as modern humans, especially the skull of child, which has no visible difference from that of a modern child. It was determined the skulls date back to 154,000 to 160,000 years ago.

The fossil was discovered by accident in 1997. Due to the climactic influence of the oceans in this part of Ethiopia, some fossils were exposed. When Dr. White and his investigators passed through the area, the fossil of a hippopotamus was found. After careful examination, it was discovered that the fossil showed cuts made by stone tools, indicating that human beings had lived there in prehistoric times. 11 days later, the investigators returned and discovered two adult skull fossils within a few minutes. Then about 200 pieces of a child's skull fossil were found. After years of cleaning, reconstruction and investigation, they announced their discovery to the world: these skulls are from a time 1,000 generations earlier than those of the what had previously been the earliest human beings discovered.

The findings indicate that human beings existed on earth much earlier than had previously been known.

“France: The Global Coalition for Bringing Jiang to Justice held a Conference in the Chinese District of Paris”