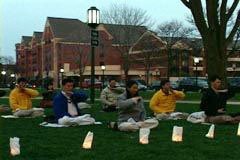 Ivon, an English major at the University of Michigan and a practitioner for three years, talked about his understanding of the activity: "For four years, Falun Gong practitioners were persecuted in China and oversea countries. Even now, the Chinese government is still killing practitioners. Death reports are sent out day after day. This is a worrisome phenomenon. It shows the Jiang regime is escalating the persecution in China. We need to act quickly to stop the persecution. No more innocent people should be murdered."

Tim, a lecturer in the Music department at the University of Michigan who started to practice Falun Gong in August 1999 said, "Let's continue our work and do what we ought to do: ask the Chinese government to stop the persecution and at the same time, clarify the truth to our friends and relatives, government officials and people in society. I hope the day that Chinese Falun Gong practitioners can freely choose their belief will come soon."