Falun Gong at the "Altonale," the largest Civic Festival in Hamburg, Germany (Photos)

(Clearwisdom.net) The "Altonale," Hamburg's largest civic festival, celebrated its fourth anniversary between June 7th and June 9th, 2002. These three days of the festival are an opportunity for all associations, trade guilds and cultural groups to present themselves to the public. Although the deadline to obtain a permit had already passed, a practitioner called the promoter of the event to ask for a booth and the request was granted.

After that hurdle had been jumped over, the task of mobilizing the Hamburg practitioners remained a job indeed, because most of them had left for St. Petersburg. Besides that, many things needed to be done to get the booth ready. We had to prepare flyers with certain addresses, had to see that the pictures looked perfect and also had to make Buddha-drawings. After all these tasks had been organized and completed with great care, we could look forward to the festival with calm hearts.

When we arrived at the festival grounds to be told the location of our booth, the festival promoter could remember our practitioner who had contacted him and even remembered her name. Our booth assignment was in the area reserved for Asian Martial Arts and Inter-Cultural Associations. One of those sports schools had erected a small stage and permitted us to demonstrate the Falun Gong exercises at certain times.

These festival days allowed us to explain and clarify many things about Falun Gong and the persecution to visitors to our booth. Many came and presented us with questions that they had previously not dared to ask or were unable to get an answer to. 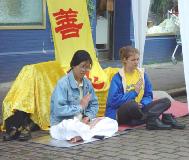