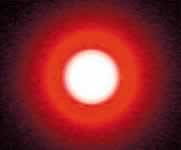 Reported by Chuncheng Evening on May 16, 2002, a wondrous scene appeared in the sky over Kunming City around 12:30 p.m. on May 15, 2002. A colorful ring of light appeared, which looked like a beautiful rainbow surrounding the sun. This phenomenon lasted for about half an hour and then faded away. Many local citizens saw this beautiful scene. 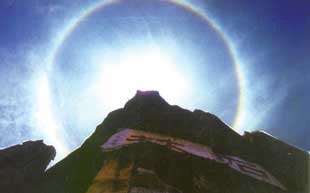 From other sources, another similar phenomenon also appeared at the Stone Forest scenic area from 12:30 p.m. to 1 p.m. on May 14, 2002. Large colorful rings of light surrounded the sun. The place was just over the Ashima (a fairy deity in a local fairy tale) stone, so that it looked like Ashima wore a golden light hat.

In the afternoon at around 6 p.m. on the same day, another unusual scene appeared in the sky to the east of Kunming City. A large colorful cloud, which looked like it was exploding, silently floated at the edge of the sky. The upper half of the cloud was a brilliant warm yellow color. The lower half was an attractive reddish-orange color. The tones were in such harmony that the view looked like a beautiful classic oil painting.