(Clearwisdom.net) Mingbao reported on May 19, 2002, severe drought not seen in many years is occurring in Hainan Province, China due to abnormal weather. This year the rainfall for the entire province was only 86 mm, down 72% in comparison with the same point last year. In the province, 82% of towns and villages suffered from drought and 39% of the farmlands were affected. The photo shows the Ding'an Reservoir drying up, resulting in the earth cracking and fish dying. 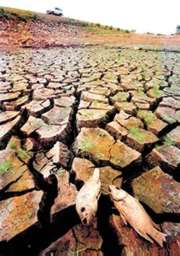