WHEREAS, In the course of the evolving development of this great Empire State, when the ingredients of shared concern and responsive endeavor combine in a harmony of commitment, there have emerged certain self-improvement practices which warrant special recognition; and

WHEREAS, This Legislative Body takes this occasion to memorialize Governor George E. Pataki to proclaim April 15-21, 2002 as "Truth, Compassion and Tolerance Week" in New York State; and

WHEREAS, Falun Dafa, also called Falun Gong, is an advance practice system to improve the mind and body based on the universal qualities of "Truthfulness, Compassion, Tolerance"; it was introduced to the general public in China in 1992, by Mr. Li Hongzhi, who now resides in the United States; it has helped people worldwide improve their health, purify their mind, deepen their understanding of life and humanity, and it has helped numerous people turn away from drugs, alcohol, violence and other bad habits; and

WHEREAS, Falun Dafa is practiced by about 100 million people in over 50 countries; Master Li Hongzhi, founder of Falun Dafa, has been honored by officials all over the world with over 700 awards and honors, and is a two-time Nobel Peace Prize nominee; and

WHEREAS, The Photo Exhibition "The Journey of Falun Dafa" will be held in the North Lobby of the Concourse of the Empire State Plaza in Albany, Now York. In conjunction with "Truth, Compassion and Tolerance Week"; it showcases the evolution of Falun Dafa from the most highly recognized and honored self-betterment practice in China during the early 1990's to the most violated and persecuted group in China today; at the same time, it highlights the growth of Falun Dafa in all other parts of the world; and

WHEREAS, The Photo Exhibition "The Journey of Falun Dafa" has been shown in many countries and regions, including: Canada, England, Germany, Japan, Russia, the Ukraine, Hong King, and Taiwan; in the United States, it has been shown at the Gallery Stendhal in Soho, New York, the Martin Luther King Library In Washington, D.C. and California's Cal Tech University hosted a portion of the exhibit; and

WHEREAS, Falun Dafa has drawn over 100 million people from every social class and way of life, every ethnic and racial group, and they have seen their lives changed by its teachings of "Truth, Compassion and Tolerance"; now, therefore be it

RESOLVED, That this Legislative Body pause in its deliberations to memorialize Governor George E. Pataki to proclaim April 15-21 2002 as "Truth, Compassion and Tolerance Week" in Now York State; and be it further

RESOLVED, That a copy of this resolution, suitably engrossed, be transmitted to the honorable George E. Pataki, Governor of the State of New York, and Xueyuan Wu.

By order of the Senate
Steven M. Boggess, Secretary 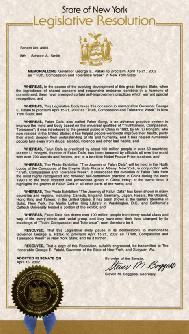