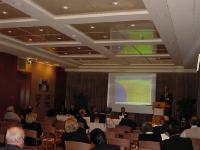 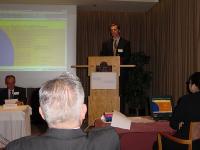 On Wednesday, April 3, 2002 the Human Rights Parallel Forum held a day-long conference at the President Wilson Hotel in Geneva to address increasing concerns over the way that some governments that are the worst violators of human rights easily obtain seats on the United Nations Human Rights Commission to silence those they oppress. Falun Gong practitioners were invited to speak in a panel discussion about the Jiang regime's brutal persecution of Falun Gong and how the Chinese government continually attempts to stop Falun Gong from being discussed in the United Nations.

The audience was shocked to discover the truth about the situation in China and couldn't understand why Jiang would persecute such peaceful people. The audience asked several questions and afterwards they asked for more truth clarifying materials. We spoke with many people about Dafa after the Forum and they were all very supportive. One American woman said that she wished she had met us before Feb. 14, because she had wanted to go to Tiananmen Square to join our peaceful appeal.