On the morning of February 19, the City Council of Pittsburgh, Pennsylvania unanimously passed a resolution condemning the Jiang regime's brutal persecution of Falun Gong. The resolution commends Falun Gong practitioners for seeking to enrich their lives and for peacefully resisting an unjust violation of their human rights. It also urges the People's Republic of China to immediately cease its persecution of Falun Dafa practitioners and immediately release all Falun Dafa practitioners from detention. The city council also declared May 13, 2002 Falun Dafa Day in the city of Pittsburgh.

The resolution was sponsored by council member William Peduto. The atmosphere of the ceremony was solemn. After Mr. Peduto read the resolution, practitioners spoke to the attendees. Practitioners expressed sincere thanks to council members for their support and further exposed the brutal persecution happening in China. Mr. William Peduto spoke again after the practitioners' speeches. He stated that the brutal killing of Falun Gong practitioners is also happening in the sister city of Pittsburgh -- Wuhan City of Hubei Province. He said, "I understand the spirit of sister cities. But on the basis of human conscience, I suggest we should send today's resolution to Wuhan city to show our stand on this issue." The motion was passed at once by the city council. 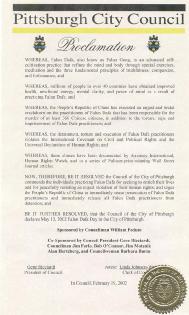 “The People of Taiwan Have A Bright Future”