Member of the Knesset

Office of the President

I write this letter to condemn the brutal persecution against your citizens that practice Falun Gong.

What your regime is doing is unacceptable because all human beings have the basic right to try to improve themselves according to whatever path they choose, there is simply no way to justify such a persecution. You have chosen to change, by brute force using the most cruel methods imaginable, the hearts and minds of millions of your own citizens - no decent human being can accept this. Even your worst claims against the people of Falun Gong can not possibly justify such a persecution.

We call on you and your government to stop this persecution immediately, stop the torture, release all those jailed, restrain your police to act with dignity, stop the physical and mental abuse, and restore the basic civil rights of all Falun Gong practitioners.

I also call on all governments and good people of this world to stand up against the persecution of Falun Gong practitioners and I praise those that have already stood up.

No human being should remain silent when persecution takes place.

Chairman of the Opposition 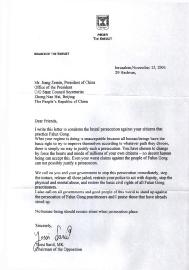 “Some Experiences in Clarifying the Truth to Chinese People”