(Minghui.org) Practitioners conducted activities in front of the Nobel Prize Museum in Stockholm, Sweden on January 7, 2023. The weather was cold and they braved the wind and snow to tell people about Falun Dafa and its principles of Truthfulness-Compassion-Forbearance. They also explained how the Chinese Communist Party (CCP) has persecuted Falun Dafa for 23 years and collected signatures to call for an end to the brutality. 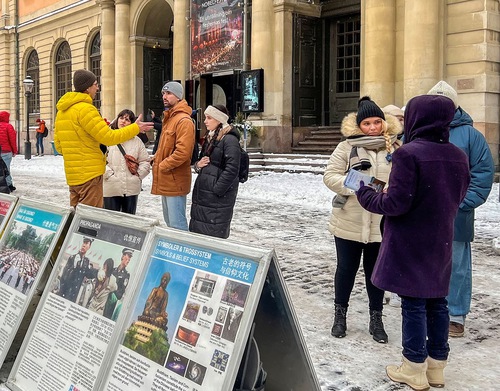 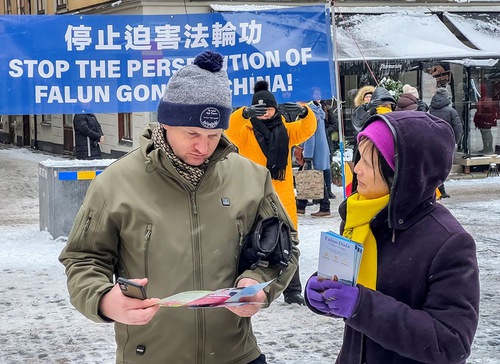 Practitioners held an event in Stockholm on January 7. 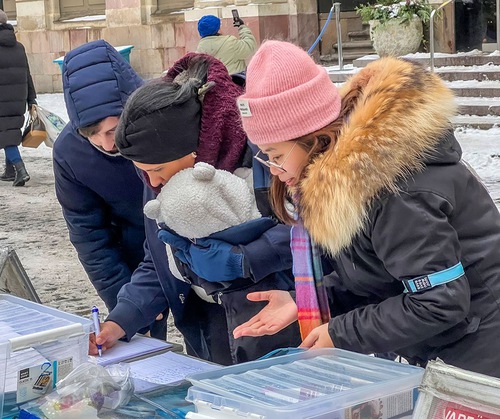 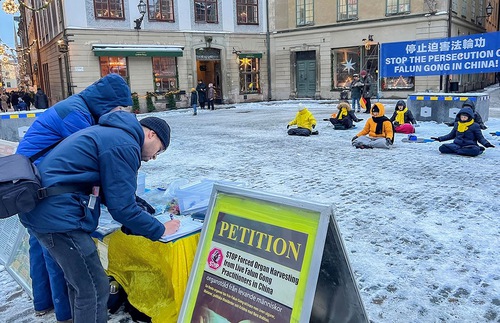 People sign petition calling for the persecution to end.

Raising Awareness and Calling for Joint Effort to Stop the Persecution

Practitioner Johan was the event organizer and said, “The truth-clarification activities we hold remind people that the CCP has persecuted Falun Dafa practitioners for 24 years. It is still going on. We are all beneficiaries of practicing Truthfulness-Compassion-Forbearance, and we have the responsibility to help the world’s people learn the CCP’s true nature and avoid being misled by it’s lies.

“At every activity, we meet a lot of kind people. After they understand the truth, they praise us, and offer help and support, which is inspiring. In the new year, we will work harder to raise awareness until the persecution stops.”

A couple from Chile talked with Johan for a long time. The gentleman was an engineer working in a mine in Chile. He was indignant after learning about the CCP’s organ harvesting.

“For economic interests (the CCP) can do anything. I know something about the CCP’s brutality,” he said. “The ambassador of the Chinese embassy personally required us to buy certain products from China, otherwise, they would not cooperate with us. Those products were inferior and made by slave labor in China.” 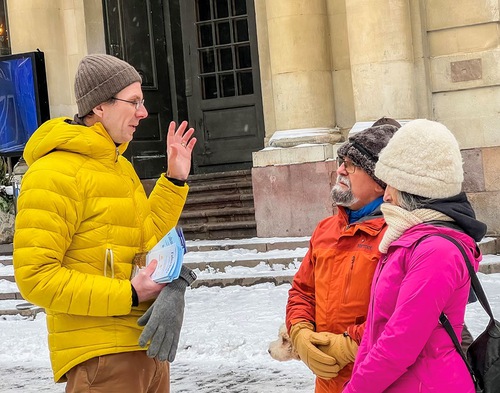 Johan (left) talks with a couple from Chile.

The couple signed the petition against the persecution and took photos. The man said he worked in a community organization and would organize a press conference to spread the word.

Daniel is a college student. He and his family participated in the activity that day. He said, “Young people may be more likely to arouse the interest of those around them when they clarify the truth. This allows people of all ages to learn about Dafa.” 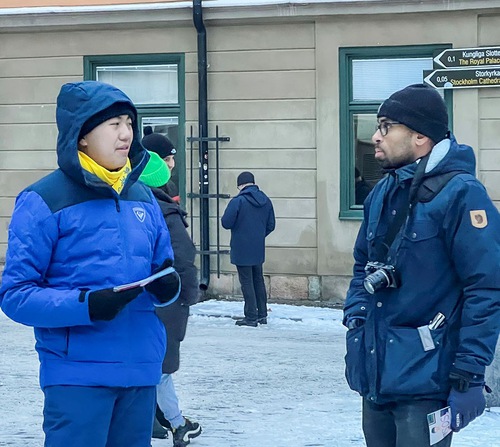 Don is an ice hockey player, and Dima is a photographer. When the two young people passed by the event site, they talked to Daniel and listened attentively as he described the persecution. When they learned how the CCP harvests organs from practitioners while they are alive, they were indignant and signed the petition without hesitation. They said everyone should help to stop this persecution.

Daniel was happy to see the event awakened several young peoples’ sense of justice, “The persecution of Falun Gong practitioners, especially the forced organ harvesting, is beyond words. We expose the Party’s crimes and hope more people pay attention. This stops the CCP from continuing to do evil, and supports practitioners in China and helps to relieve the pressure on them. It is important to tell people about these human rights violations.”

Mr. Li, a Falun Dafa practitioner, just got off the night shift and went to participate in the activity. “Although I was a little tired, seeing the joy of many people after they understood the truth wiped away my tiredness,” he said. “I feel extremely happy practicing Dafa. I do my best to share the principles of Truthfulness-Compassion-Forbearance with those around me and help them learn about Dafa.” 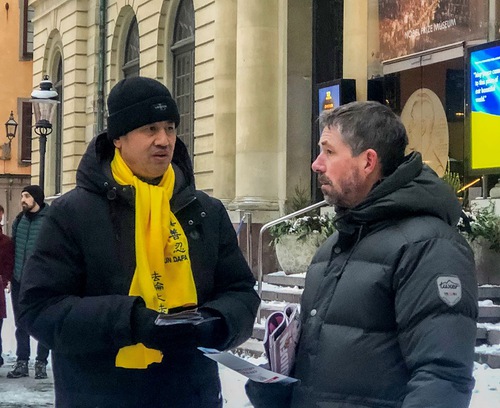 Mr. Li also shared that his relatives in China recovered from COVID-19 recently after reciting the two phrases “Falun Dafa is good. Truthfulness-Compassion-Forbearance is good.”

When he called a niece in China during the New Year, the niece said excitedly, “We have been looking forward to your call. We’ve recited the phrase ‘Falun Dafa is good,’ and we know it saved us. Everything you told me is true.”

It turned out that about a week ago, the octogenarian mother of Mr. Li’s niece tested positive for COVID and soon both the niece and her husband were infected. They had no medical treatment and no medicine. They were in great pain, and the old woman was dying.

“But we couldn’t just wait to die. In desperation, I recalled the two phrases you told me,” the niece said. So, they sincerely recited the phrases every day. To their amazement, their physical conditions improved day by day, and all soon recovered.

Mr. Li said that his niece has a large family and the whole family already quit the CCP organizations. This experience made his niece and her family admire Falun Dafa from the bottoms of their hearts. The niece also said that she told all members of the family that they must remember the two phrases and recite them every day.

“Crimes of Zhu Shouke, Director of Prison Administration at the Public Security Department”