(Minghui.org) Practitioners held activities to introduce Falun Dafa in Sakae, Nagoya’s busiest area the weekend of August 27-28, 2022. They demonstrated the exercises, handed out information and collected signatures on a petition to call for an end to the atrocities in China near the fountain in Sakae.

The Nippon Domannaka Festival was held in Nagoya city center that weekend. According to festival organizers, 10,000 performers from 160 dance groups, from Hokkaido in northern Japan to Kagoshima in the south, attended the event held over three days from Friday August 26 to Sunday August 28. There were around 110,000 spectators.

The streets were filled with dance groups from various parts of Japan and festival attendees. Practitioners displayed banners with messages in English, Chinese and Japanese including “Falun Dafa is Good”, “Truthfulness, Compassion, Forbearance”, “Falun Dafa is Practiced around the World”, “SOS Stop Persecuting Falun Gong Practitioners” and “Stop the Chinese Communist Party from Harvesting Organs from Falun Gong Practitioners for Huge Profits!” One of the festival’s stages was next to the spot where practitioners held their activities. Many people read their banners, took information, and expressed support for their efforts to expose the persecution. 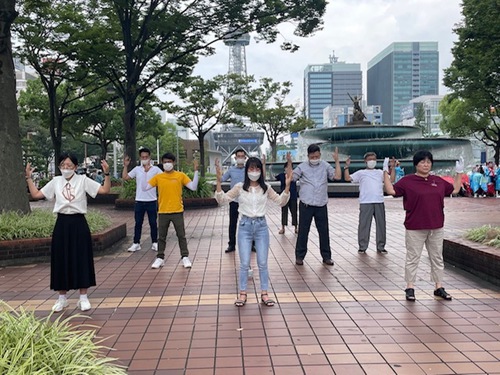 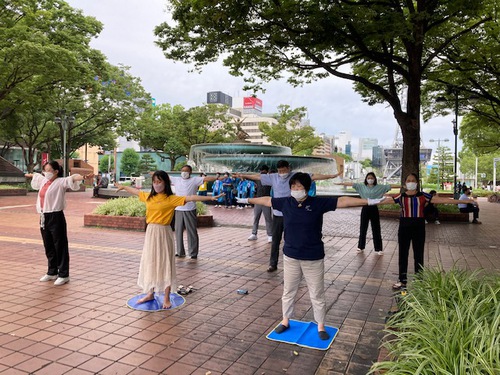 Practitioners demonstrated the exercises in the busiest section of Nagoya city – the Sakae fountain, the weekend of August 27 - 28, 2022.

“People from Around the World Support You”

During the two days of activities, passersby stopped to take photos. Some took information or signed the petition.

A mother and daughter whose last name is Fujimura passed by on the afternoon of August 27. A practitioner approached them and told them about the persecution in China. They both immediately signed the petition. 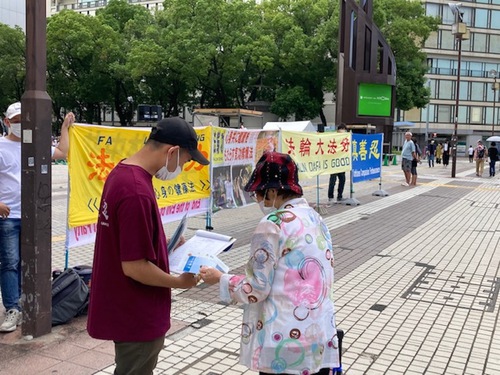 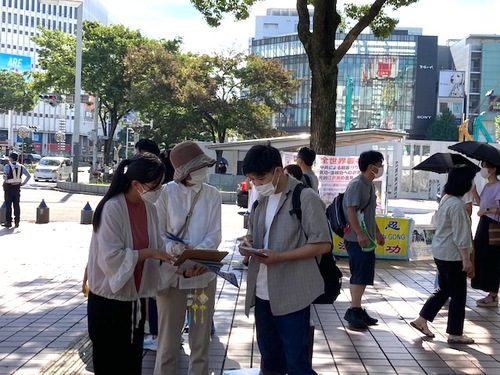 Practitioners tell people about the persecution in China to passersby at the Sakae water fountain in Nagoya city on August 27 and 28, 2022.

After a man read about the live organ harvesting on the banners on August 28, he came up to the table and signed the petition. He asked practitioners about it and took some information. He encouraged practitioners, saying, “You must keep up your efforts!” 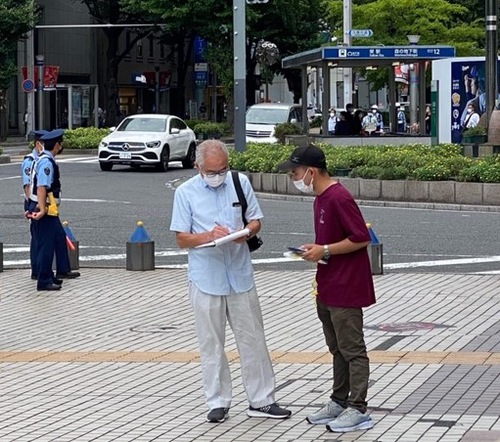 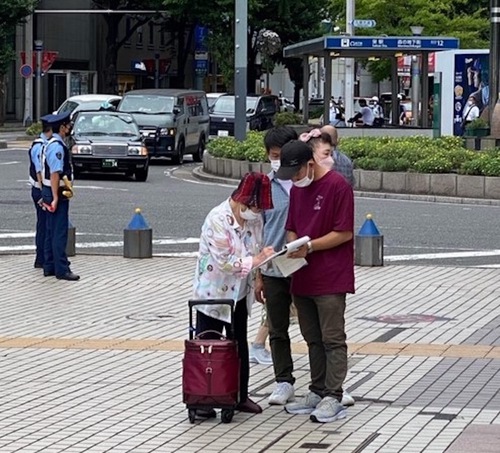 People sign the petition to support ending the persecution during activities held near the fountain in Sakae, Nagoya.

A well dressed elderly man walked up to the table. He told practitioners that he had learned about the persecution the last time he passed by the area, and he took information and a lotus flower. He returned to sign the petition. He said the Communist regime is truly evil by stopping Chinese citizens from exercising their freedom of belief and stealing their organs. He hoped the regime would collapse soon. He encouraged practitioners to keep up the good work, saying, “People around the world support you!”

Another elderly man said in Japanese “keep on going” as he passed by.

Chinese Students Learn the Facts about the Persecution

Practitioners also talked to Chinese nationals living in Japan during the two day event. On the afternoon of August 28, a practitioner noticed a young man taking photos of the banners and the table with fliers and lotus flowers. He began chatting with him. The young man explained that he was a student from China, and that he would send the photos to classmates in China, as many of them were not aware of how brutally the CCP (Chinese Communist Party) is suppressing Falun Dafa. They also did not realize that the CCP was taking organs from detained prisoners of conscience without consent and selling them for huge monetary gains.

A man who appeared to be in his 20s stopped, took out his mobile phone and began taking photos of the banners with information about Falun Dafa. A practitioner gave him information. He told the practitioner he was from Xi’an, China and was attending university in Japan.

When the practitioner asked if he had heard that millions of Chinese have already quit the CCP, he said no. Practitioners explained why it was important. He said he joined the Young Pioneers and the Youth League when he was in China and took the information about quitting the CCP.

He thanked practitioners for explaining things to him and said he would think about withdrawing his membership in the Party.

Staff and dancers from many dance groups in Japan, including Aichi, Gifu and Nagano prefectures, walked past the information booth throughout the weekend. Practitioners gave them fliers. Some of them told practitioners, “You work hard! Keep up the good work!”

“Crimes Committed by Ding Shunsheng, President of Hebei Provincial Procuratorate in the Persecution of Falun Gong”