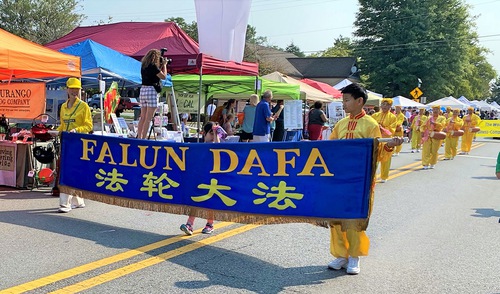 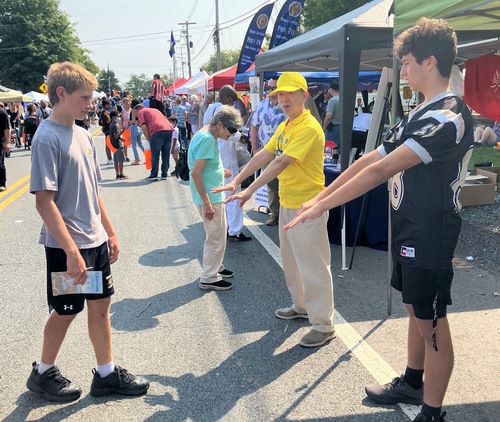 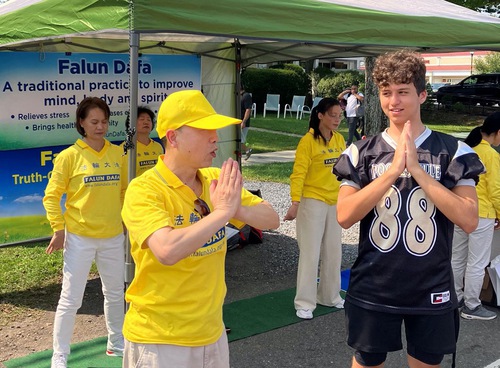 Falun Gong’s waist drum team and a truth-clarification procession participated in the parade. At the end of the parade, Maryland State Delegate Neil Parrott and his wife took a group photo with the group.

Delegate Parrott’s wife said she had heard about Falun Gong many years before when she was in college. She read the Falun Gong display boards on campus. When she learned that several practitioners who had participated in the parade had been persecuted in China, she was surprised and asked about their experiences.

One of them was Ms. Wang Chunrong, an entrepreneur from Dalian in Liaoning Province, China. She was illegally detained for three and a half years because of her belief.

Her sister, Ms. Wang Chunying, was a head nurse in a hospital in Dalian and was illegally detained twice in the infamous Masanjia Forced Labor Camp for five years and three months. Her sister was tortured with sleep deprivation, beatings, being suspended by her hands, and long hours of forced labor.

Another practitioner in the parade who had been brutally persecuted in China was Dr. Zhang Yuwei. She started practicing Falun Gong in 1996. Because of her belief in Truthfulness-Compassion-Forbearance, she was persecuted in a CCP brainwashing center. Mrs. Parrott was sincerely sympathetic to these Falun Gong practitioners who suffered such persecution at the hands of the CCP for their belief.

After the parade, practitioners demonstrated the five Falun Gong exercises in front of their booth and told people about the CCP’s persecution in China.

One man, Larry, was drawn to the Falun Gong booth. He pointed to the flyer in his hand and said, “Truthfulness-Compassion-Forbearance is good. I think this practice must be good.” He said he would go to a local group practice site to learn it.

Chris Chaffee, who is running for Senate, chatted with a practitioner and signed the petition demanding that the CCP stop harvesting organs from living Falun Gong practitioners in China. 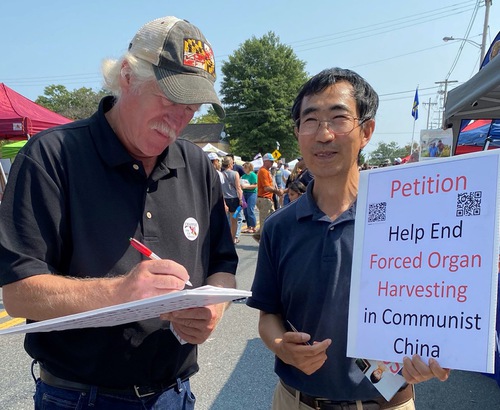 Chris Chaffee, candidate for the Senate, signs the petition urging the CCP to stop organ harvesting.

Ms. Amisha Barochia is a researcher in internal medicine. She stopped to chat with a practitioner. “I think we all need to follow Truthfulness-Compassion-Forbearance; we all have to be patient, especially in today’s society,” she said. “The CCP’s persecution of Falun Gong practitioners is so bad. People are persecuted because of their beliefs—it’s really unfair. They have the right to choose their beliefs.”

Brenda, a local resident, said she has seen Falun Gong practitioners participate in the event for many years. “The world needs Truthfulness-Compassion-Forbearance,” she said. She signed the petition protesting the CCP’s organ harvesting from Falun Gong prisoners of conscience.

During the event, nearly 100 people signed the petition calling for an end to the CCP persecution.

Jiang Zemin, former head of the CCP, perceived the spiritual discipline’s growing popularity as a threat to the Party’s atheistic ideology and on July 20, 1999, he issued an order to eradicate the practice.