(Minghui.org) July 20, 2022, marked 23 years since the Chinese Communist Party (CCP) began to suppress Falun Gong. Around this anniversary, Falun Gong practitioners in 38 countries submitted an updated list of perpetrators, including those in law enforcement, the judiciary, and the Political and Legal Affairs Committee, to their respective governments, urging that those on the list (and their family members) be barred from entry and their assets frozen.

Wu Zhe, former chief prosecutor of Dalian City Procuratorate is on the list. 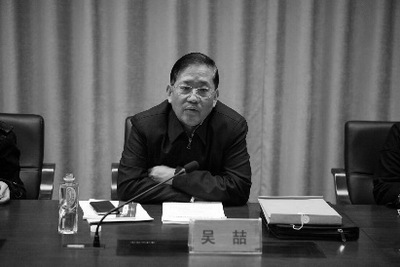 When Wu served as the chief prosecutor of Dalian City Procuratorate, he actively implemented the directive with regard to Falun Gong practitioners to “ruin their reputations, destroy them physically, and bankrupt them financially.” He worked with the Dalian Political and Legal Affairs Committee, the 610 Office, police and judges to get practitioners sentenced. He also directed the procuratorate in Dalian to “actively participate in... the fight against cults.”

Ms. Liu Jinyu was arrested at home on April 21, 2016. She was tried in the Dalian Development Zone Court on October 21, 2016, and sentenced to three years and three months at Liaoning Women’s Prison. She was tortured and became too weak to eat or drink. She also had difficulty breathing. Near death, she was granted medical parole in early April 2018. She passed away days later, on April 15. She was 67.

2. Mr. Zheng Decai Dies after Over a Year of Imprisonment

Mr. Zheng Decai was arrested on September 4, 2017. He was released on bail due to his physical condition after 37 days of detention. On March 14, 2018, the Zhuanghe City Court called his family and ordered him to appear in court. The police came on March 27 and ordered him to write a statement to give up Falun Gong. The police threatened to sentence him to prison if he continued to practice Falun Gong.

Mr. Zheng refused to comply and was sentenced to a year and half in Dalian Prison. He was tortured and otherwise abused. When he was released on August 19, 2019, he could barely walk and had difficulty eating. He passed away on November 21, 2019. He was 82.

Ms. Zhong Shujuan, 66, of Dalian City, Liaoning Province, died in Liaoning Women’s Prison on December 24, 2021, three years after her request for medical parole to be treated for breast cancer was denied. Her body was cremated in the presence of the police, prosecutor, and judge who were involved in her sentencing.

Ms. Zhong was sentenced to seven and a half years following her last arrest on June 28, 2016, and remained detained in Liaoning Women’s Prison until she died. Inside, the guards used despicable methods to try to force her to renounce Falun Gong. She developed breast cancer and eventually died after being denied medical parole.

Mr. Liu Xiyong was repeatedly incarcerated for upholding his faith and raising awareness about the persecution. On April 9, 2018, he was sentenced again, this time to three years, without a trial.

When Mr. Liu’s family went to the prison to pick him up on April 9, 2021, they were devastated to learn that the 80-year-old man, who had just finished serving the three-year term, had been taken away by the police. He was sentenced to another four years in prison and fined 6,000 yuan.

In December 2021, Mr. Liu was again admitted to Dalian Central Hospital because he was seriously ill. When his family went to take care of him, they were surprised to see that Mr. Liu’s face, hands, and feet were all swollen. He appeared to be incapacitated and was unable to speak clearly.

On December 20, his family insisted on taking him home, but the prison authorities refused, saying that, without renouncing Falun Gong, Mr. Liu would not be allowed to leave as long as he was still breathing. They also said that his illness was acquired in the detention center and had nothing to do with Dalian No. 3 Prison. They demanded that Mr. Liu’s family pay all his medical expenses.

Mr. Liu passed away in the hospital at the age of 80 on December 29, 2021. The prison staff did not allow his son to take his body. They took it to a funeral home themselves, fearing that his family would file a complaint against them. The police guarded his body until it was cremated on January 1, 2022.

5. Sentenced to Prison While Still in a Coma, Math Tutor Passes Away

Mr. Ding Guochen was still in a coma when he was sentenced to prison for practicing Falun Gong. The math tutor from Dalian City, Liaoning Province, passed away two months later, on April 30, 2022. He was 51 years old.

Mr. Ding and his wife Ms. Yan Qinghua were arrested on July 10, 2019. Ms. Yan was released on bail that evening, but Mr. Ding was held and tortured in Dalian Detention Center. As a result, he suffered a stroke and lost hearing in both ears. He was released on bail on October 1 that year.

Mr. Ding’s condition improved after he returned home by studying the Falun Gong books and doing the exercises. However, the police and personnel from the judiciary department kept harassing him. The pressure took a toll on Mr. Ding’s health. He suffered a second stroke on January 27, 2021. He was unconscious and had to be taken to an emergency room.

The Liaoning Political and Legal Affairs Committee and 610 Office gave orders for a group arrest on June 28, 2016, in Dalian City and surrounding areas. Of the targeted practitioners, six of them were sentenced on December 22, 2017. Mr. Liu Renqiu was sentenced to ten years and fined 50,000 yuan. Ms. Sheng Jie was sentenced to seven years, Ms. Wang Hongyu to three and a half years, and Ms. Gu Shuchun to two years. Mr. Liu Daixue and Mr. Wang Huixun were each sentenced to three years in prison with three years of probation.

More than 20 practitioners in Dalian were arrested on November 12, 2018, after being wiretapped and tracked by the police for some time. Seven practitioners were indicted and later sentenced.

The Dalian City Public Security Bureau dispatched a large number of police officers on July 10 and 11, 2020, to arrest at least 30 practitioners, including some in their 90s. Most of their homes were ransacked. Seven practitioners were sentenced in December 2020. Among them, Mr. Du Yongfeng was sentenced to nine years, Ms. Zhang Chunfeng to seven years, Ms. Fan Yongmei to four years, Ms. Zhang Liping to three years, Ms. He Yongqin to three years, and Ms. Wei Duo and her husband Mr. Chu Zhengjie were given one year each.

Mr. Ren Hanfei was arrested from his rental apartment on June 26, 2020. The police took his 550,000 yuan in cash, as well as digital cards and electronic products worth over 200,000 yuan. That same day, Ms. Sun Zhongli from Dalian was also arrested, and her residence ransacked.

After being detained for over a year, the two practitioners appeared in the Ganjingzi District Court on September 8 and again on September 23, 2021. Mr. Ren was sentenced to ten years in prison and fined 100,000 yuan, while Ms. Sun was given seven years and fined 70,000 yuan. They are appealing their sentences.