(Minghui.org) Falun Dafa practitioners gathered in front of the Parliament House in Helsinki on September 6, 2022 to raise awareness of the persecution by the Chinese Communist Party (CCP). Since the persecution started in July 1999, a large number of practitioners have been detained, tortured, and killed for their belief in Truthfulness-Compassion-Forbearance. Some became victims of the CCP’s state-sanctioned forced organ harvesting.

Numerous banners were displayed on the lawn with contents such as “Falun Dafa is good,” “Stop Forced Organ Harvesting in China,” and “Reject the Chinese Communist Party and Stop the Brutal Persecution.” Portraits of practitioners who lost their lives due to the persecution in China were displayed next to the roadside flowerbed. Many passersby took flyers, talked with practitioners, and signed the petition. 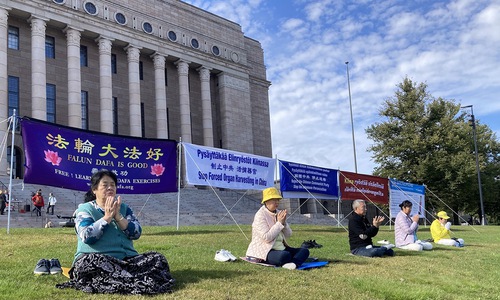 Practitioners displayed banners in front of the Parliament House in Helsinki, Finland 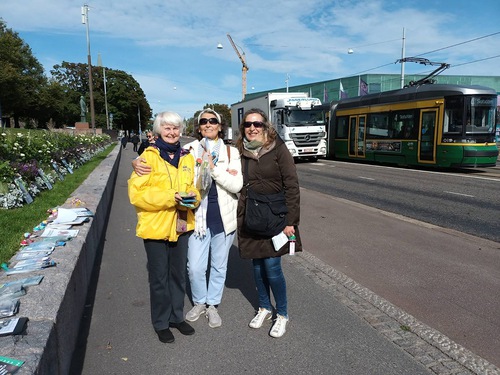 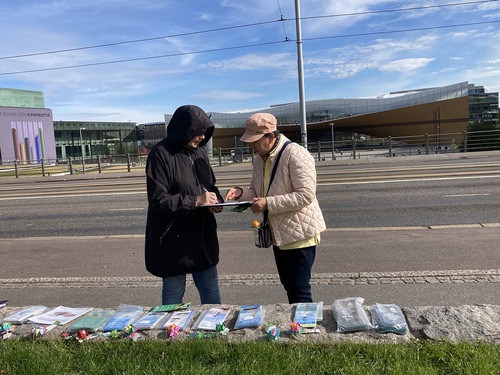 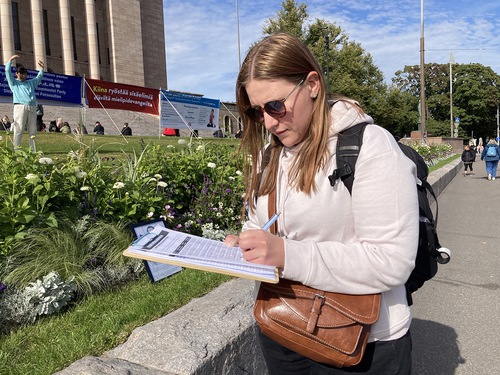 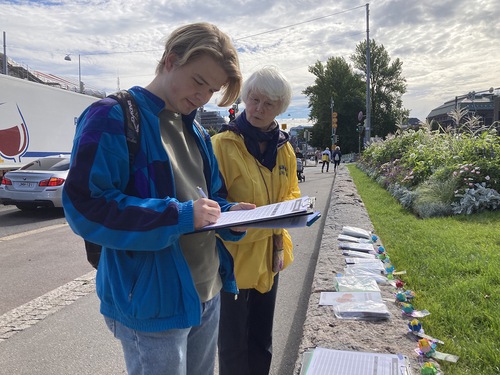 After talking with practitioners, people signed a petition to stop the persecution of Falun Dafa in China.

This was the first day parliament members returned to office after the summer break. One police officer on duty said there were also activities from other groups, but practitioners’ events were always very peaceful.

Matti Semi, member of parliament (MP) since 2015 saw practitioners’ activities on his way to work. He stopped and directly signed the petition.

As he talked with practitioners, a woman asked what was going on. “Forced organ harvesting in happening in China,” Semi replied.

“What do they do with them? Sell them for money?” she asked.“Yes,” said Semi as he nodded. The woman was shocked and began to read the materials.

When they left they thanked practitioners and encouraged them to keep up their efforts.

A student named Lova came on a bike and after talking with practitioners, signed the petition. She said the principles of Truthfulness-Compassion-Forbearance are important values and they apply to everyone. Especially during the pandemic, people are terrified and afraid and hardly think of this. 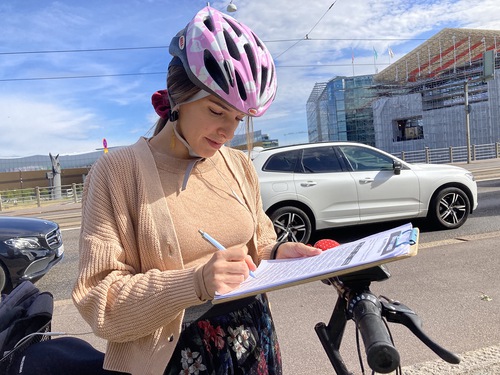 She said it was shameful that the CCP would suppress such a peaceful group and only a totalitarian regime would do things like this. Apparently the CCP is afraid that people would have independent thoughts and know the facts. In fact, from these incidents people would know the CCP was lying and they would not listen to the regime.

The forced organ harvesting, in particular, was indeed shocking. “I do not know what to say because the brutality is beyond imagination,” she said. “But I do know the nature of the CCP.” She thanked practitioners for organizing such a great event and helping people know what is happening in China.

The Worse the Persecution Is, the More Supporters There Will Be

Local resident Mikael said he received a pamphlet from a practitioner during the World Village Festival in Helsinki this summer. After he and his wife read the information he took some more materials and read them.

He could not understand why the CCP would persecute such a peaceful group like Falun Dafa. He’s been interested in the human rights situation in China, did some research and learned what practitioners said was correct. No matter whether it is Falun Dafa practitioners, Tibetans or other minority groups, they all deserve freedom. That was why he signed the petition. 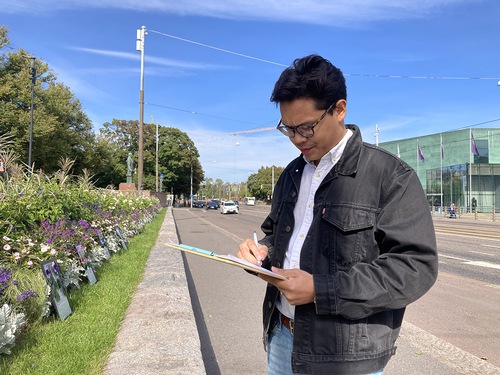 Mikael signed a petition to end the persecution.

He hoped more people in the international community could help with this. After reading banners put up by practitioners and watching the group exercises, he said practitioners’ peaceful efforts to expose the totalitarian CCP regime demonstrated the power of kindness, “You (practitioners) will not be defeated,” he added.

Looking back in history, Mikael said, “The more severe the persecution is, the more people would understand the facts and support the right cause. That is, as the CCP intensified persecution of Falun Dafa, many people will know the facts and stand with innocent practitioners,” he said.

In the end, he said the words Truthfulness-Compassion-Forbearance are great, and they are what our society needs.

“Reported in July and August 2022: 1,850 Falun Gong Practitioners Arrested or Harassed for Their Faith”