(Minghui.org) Today's news from China includes incidents of persecution that took place in 5 cities or counties in 4 provinces, where at least 9 practitioners were recently persecuted for their belief. 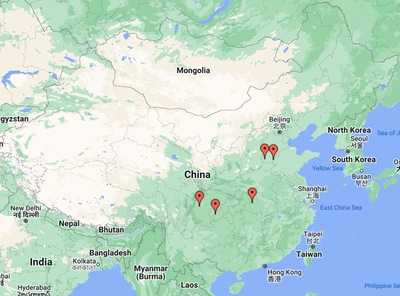 Five male officers and one female officer from the Qionglai City Police Department went to Ms. Liu Surong’s home in the Xinjin District of Chengdu City on September 5, 2022. They ransacked Ms. Liu’s home and confiscated nine Falun Gong books, two media players, and one video player. Ms. Liu was taken to the Qionglai City Police Department for interrogation. At 11 p.m. the police took her to the Yang’an Town in Qionglai City to verify the locations where Ms. Liu distributed truth-clarifying materials. Ms. Liu was released on bail pending trial.

Mr. Liu Deyu was arrested by officers from the Quankou Police Station on July 8, 2022, for talking to people about Falun Gong. He is detained in the Jingmen Detention Center.

Six people including two police officers in uniforms went to Ms. Zhong Tingju’s home in the Kaizhou District on the morning of August 18, 2022. They photographed around the home. Tan, head of the Fengle Police Station in Kaizhou District, told Ms. Zhong, “You should say that you no longer practice Falun Gong when someone from the Chongqing Women’s Prison comes in September.”

Ms. Zhong has been subjected to forced labor a few times and has been harassed at home multiple times. Her daughter was pressured to cooperate with the police.

Mr. Li Ruzeng, about 70, lives in Shaming Village, Hejin Town. He was arrested while pasting up information about Falun Gong along the road from the Shaming Village to Yangyi Town on the afternoon of March 31, 2020. He was taken to the Yangyi Town Police Station but was released the next day.

Two years later, Mr. Li received a criminal judgment from the Ci County Court in mid-August 2022. He was sentenced to one year in prison and fined 2000 yuan. The sentence was to be executed outside of prison because of Mr. Li’s physical condition.

Ms. Zhang Guangjie was arrested by officers from the Baimiao Police Station on the morning of September 9, 2022. She was accused of distributing truth-clarifying materials, which she denied. She was released that evening.

“Do Not Slack Off in Cultivation”