Home > News & Events > Parades & Other Community Events
New York: US Open Championship Attendees Get a Chance to Learn about Falun Dafa
Sept. 17, 2022 | By a Falun Dafa practitioner in New York

(Minghui.org) The US Open Tennis Championships is held annually at the USTA Billie Jean King National Tennis Center in Flushing Meadows-Corona Park in Queens, New York. The last match this year was held on September 11, 2022, and more than 600,000 fans attended the two-week-long tournament.

Talcos and his son had traveled from Greece to watch the US Open. They paused for some time to watch practitioners do the Falun Dafa exercises. A practitioner greeted them, and Talcos said, “This is great!”

The father and son expressed interest in the practice, but were not sure how to proceed since they’d come from Greece. A practitioner gave them the Falun Dafa website link and suggested they read more about the practice in Greek. They could also search for their local group practice sites in Greece. Practitioners shared some of the ways that they’ve benefitted physically and mentally from cultivating Falun Dafa. Both Talcos and his son promised to learn more about Falun Dafa after they return to Greece. 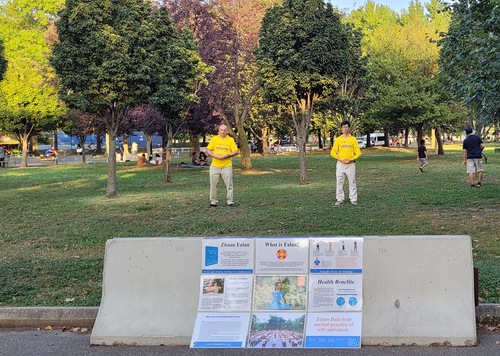 Maria and her daughter Tiffany had been passing by, but they stopped to learn about Falun Dafa and became interested in learning the exercises. A practitioner showed them how to do the exercises, and they were happy after trying them. Maria said, “We feel good after doing the exercises.” They inquired about local practice sites and learned about the free instructional videos that are available online.

Maria and her daughter Tiffany learn the exercises

Alfanzo stopped to read about Falun Dafa on a poster board. A practitioner started to chat with Alfanzo and told him more about the practice.

“Crimes Committed by Feng Gang, Director of the Jilin Provincial Prison Administration Bureau in the Persecution of Falun Gong”

“Having Served Ten Years, Shanghai Woman Gets Four More Years for Her Faith”