(Minghui.org) The annual Great New York State Fair was held in Syracuse, New York, from August 24 through September 5, 2022. Falun Dafa practitioners set up a booth at the Fair to introduce the practice and raise awareness about the persecution in China. 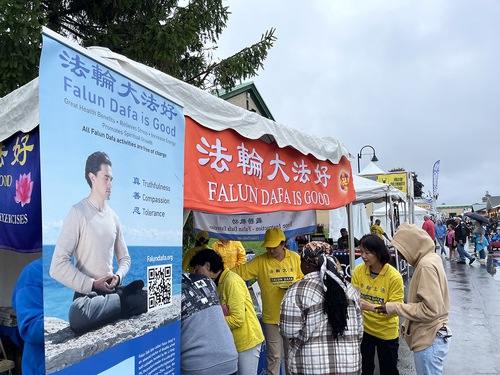 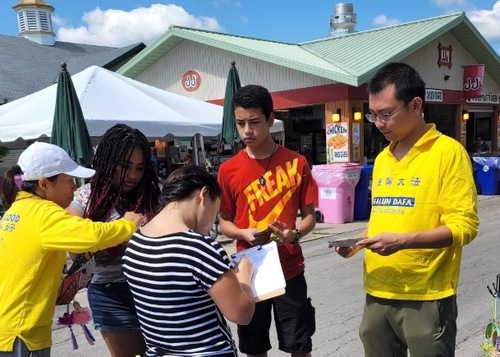 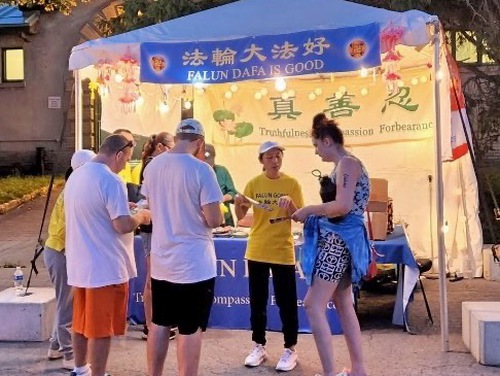 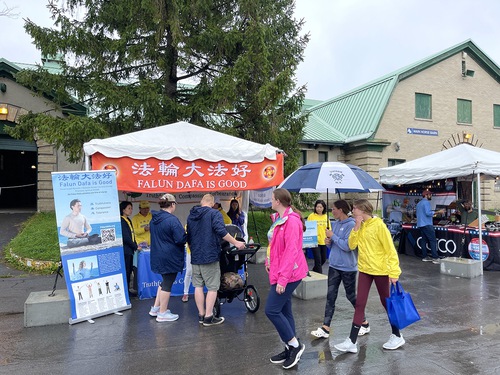 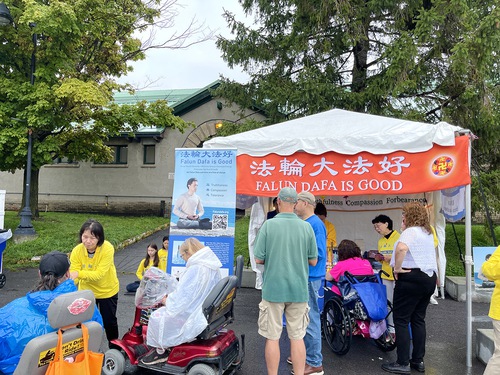 The New York State Fair is one the oldest and largest fairs in the United States and has become an annual event. In 1841, the New York State Agricultural Society held the nation’s first state fair in Syracuse, New York. The agricultural society was founded by a group of farmers, legislators and others to promote agricultural improvement in the region.

The Fair’s organizers said that this year around 900,000 people passed through the gates of the Fairgrounds for the event.

The Falun Dafa booth was adorned with large banners promoting Falun Dafa. Thousands of attendees took in the information and read the words “Falun Dafa is good” on the banners adorning three sides of the booth. A vertical poster of a practitioner sitting in meditation was displayed outside the booth, and a variety of Falun Dafa informational materials were made available on the table.

Some Eager to Take Up the Practice

A lady passed by the Falun Dafa booth on Wednesday, August 31, 2022, at around 8pm. She said that she had encountered the practice in the past but had not had the opportunity to learn more about it. A practitioner told her more about Falun Dafa and the persecution in China. The lady expressed her wish to practice Falun Dafa and purchased the English version of Zhuan Falun and Falun Gong, the main texts of Falun Dafa. A practitioner also handed her a copy of “How the Specter of Communism Is Ruling Our World.” The lady promised to read the books and to tell her eight children and her friends about Falun Dafa.

A lady in a wheelchair watched practitioners practice Falun Dafa’s five sets of exercises for nearly 20 minutes. She said she felt a strong energy field. After learning that the exercise instruction videos and the exercise music are free online, she expressed her interest in learning them. She signed the petition and expressed her support for practitioners’ efforts to end the persecution.

A local resident learned the first and second exercises on the spot and said that he felt peaceful and calm during the whole process.

David and his wife came across the Falun Dafa booth. David was excited to show practitioners his Chinese language skills, which he had started to learn during the COVID pandemic. He had not heard about Falun Dafa before. When practitioners told him about the beauty and wonders of Falun Dafa, David was very happy. But when he heard about the brutal persecution and forced live organ harvesting, he became quite upset. He purchased a copy of Falun Gong, and a practitioner also gave him a copy of “How the Specter of Communism Is Ruling Our World.” David and his wife left happily. 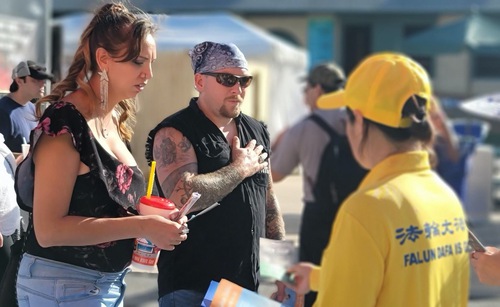 A man (middle) placed his hand over his chest to show his sincere support for the practitioners in China who firmly hold onto their beliefs despite the brutal persecution.

A man in sunglasses walked up to the Falun Dafa booth. Practitioners told him about Falun Dafa’s principles of Truthfulness-Compassion-Forbearance and about the ongoing persecution in China. The man felt sympathy for the practitioners who are persecuted in China. He expressed his respect to practitioners for firmly holding onto their belief despite the brutal persecution and China's state-sanctioned forced live organ harvesting.

A nurse told practitioners that she had visited China but had no idea about the organ harvesting atrocities or the fact that practitioners are persecuted. She expressed her support to end the persecution and forced live organ harvesting. Her husband gladly took a copy of “How the Specter of Communism Is Ruling Our World.” He promised to share it with his friends and family.

Another lady had also visited China and did not know about the persecution. She expressed her support after learning the truth about Falun Dafa.

“One Thought Changed My Life”

“68-year-old Woman Sentenced to 2.5 Years for Her Faith, Less Than Two Years After Serving Eight Months”