(Minghui.org) A traditional folk festival was held in Hanau, a city in central Germany, from September 2 to 4. Falun Gong practitioners had a booth at the festival where they introduced the spiritual practice to the public by demonstrating the exercises, making small paper lotus flowers, and talking about the Chinese Communist Party’s (CCP) persecution of Falun Gong. When people learned about the cruelty of the persecution, they signed a petition calling for an end to the atrocities.

Hanau is an important satellite city of Frankfurt, Germany’s financial center. This year marks the 60th year of the folk festival, held on the banks of the River Main beside Philippsruhe Palace. According to local media, the three-day festival drew more than 60,000 visitors. 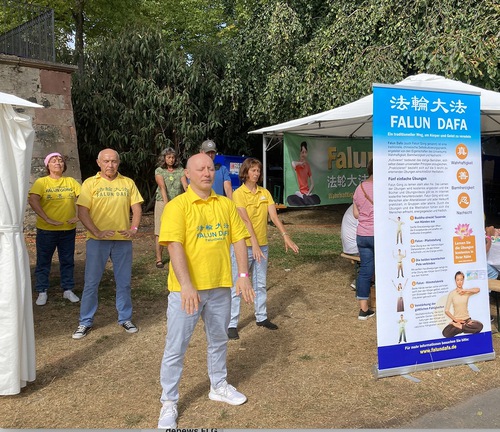 She said, “Truthfulness-Compassion-Forbearance is really good. The world needs more of this. We’re going to visit the group practice site on Sunday.” 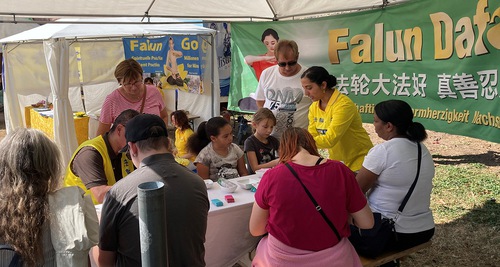 Tanja made a lotus flower with her daughter. She said, “I learned a lot today. I’m happy to get two [Minghui] magazines, and I downloaded the audio files from the Internet. Will you have group practice on Sunday? I’m very interested. Everyone is under so much pressure now. There are negative things everywhere, and everyone has to change. I think [Falun Gong] can help me, and I am very grateful for your efforts.” 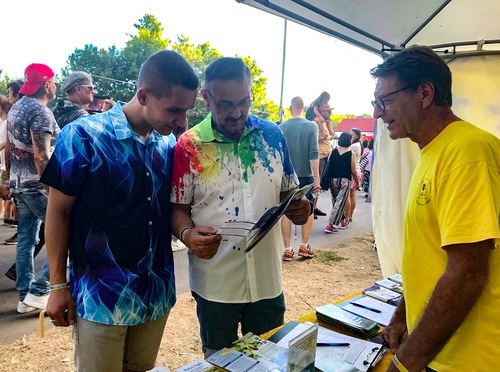 Mario and Georgi from Bulgaria carefully read the information about Falun Gong and said that they would browse the Internet to read more in their native language. 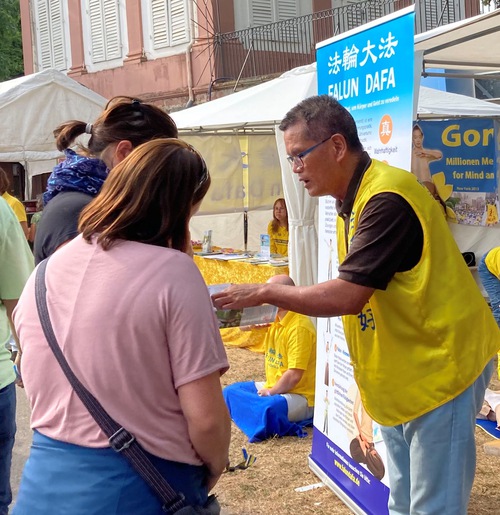 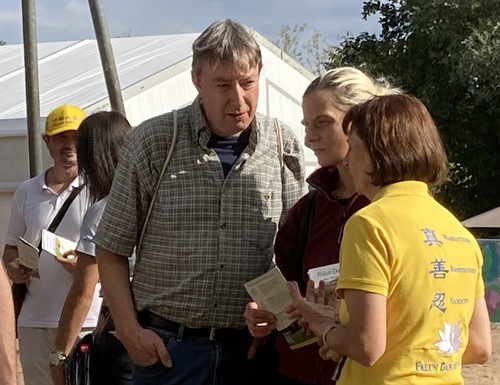 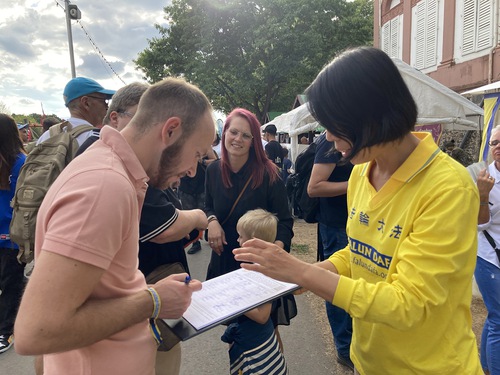 People stop to learn about Falun Gong and the persecution in China.

Alexander accepted a flyer and signed the petition. He said, “These principles [Truthfulness-Compassion-Forbearance] are important. Most people in this society should reflect on these values. We should ask where we come from and what should be the fundamental goal.

“I firmly believe that Truthfulness-Compassion-Forbearance can make society develop in a positive way. I think Western countries need your exercises very much, which can give people a clear mind and wisdom.”

Beaten learned about Falun Gong and the CCP’s persecution as her child was making a paper lotus flower. She signed the petition calling for an end to the persecution. Beaten said, “People gradually learn about this information [the CCP’s persecution of various groups] from the media, which is completely contrary to freedom and justice. Of course it is bad. If everyone can act according to this [Truthfulness-Compassion-Forbearance], the world would be better.”

Klaus signed the petition and then talked with a practitioner for more than half an hour. He said, “I think this value [Truthfulness-Compassion-Forbearance] is elegant. I wish our society could have more of these values.” Regarding the persecution, he said, “I am unable to understand why these principles are persecuted.”

“Switzerland: We Must Do Our Best to Stop the Persecution!”