(Minghui.org) Falun Dafa practitioners gathered at Krakowskie Przedmieście, one of Warsaw’s oldest business streets, to hold candlelight vigils on September 9 and 10. They commemorated the practitioners who died as a result of the persecution in China and called on the Polish government and the public to help end the 23-year-long persecution.

After learning the extent of the Chinese Communist Party’s (CCP) persecution since July 1999, many passersby signed the petition to demand the Party end these egregious crimes against humanity. 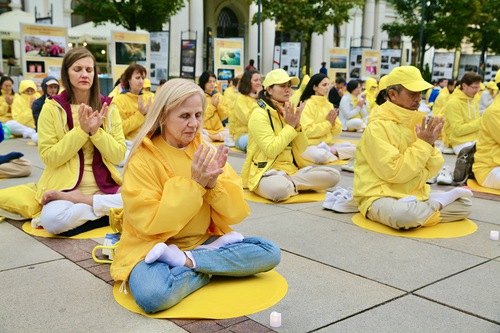 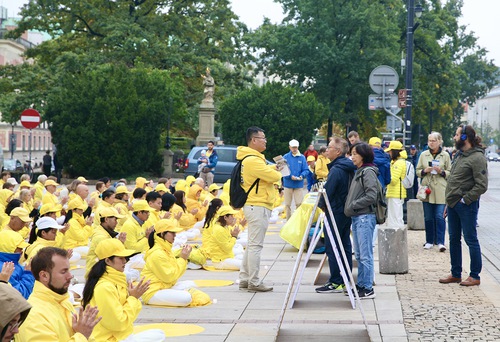 Practitioners held a candlelight vigil in Warsaw on the evening on September 10. 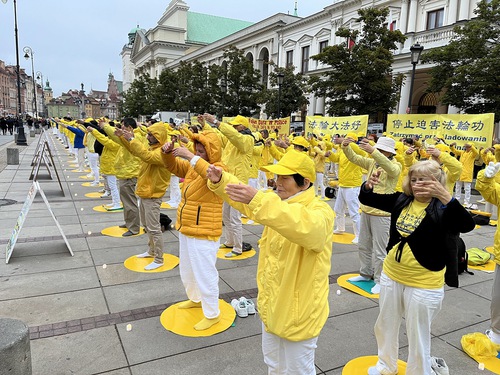 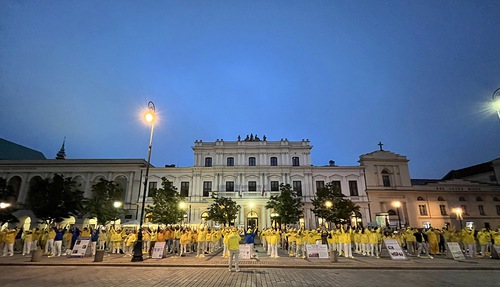 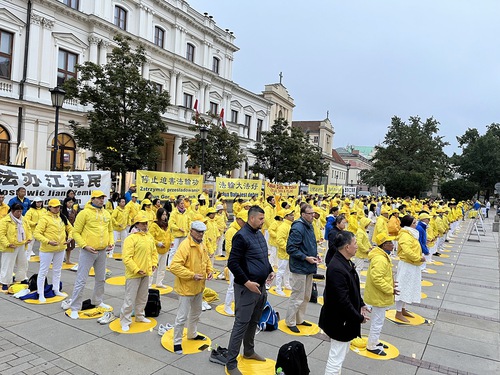 As part of the candlelight vigil, practitioners demonstrate the Falun Dafa exercises to help raise awareness of the ongoing persecution in China. 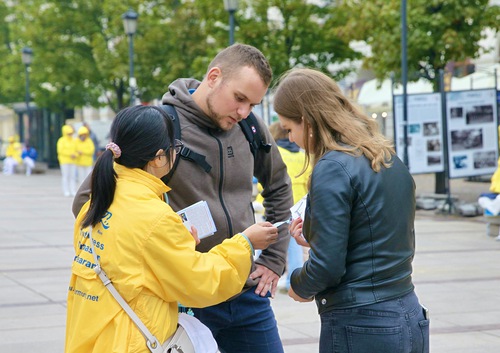 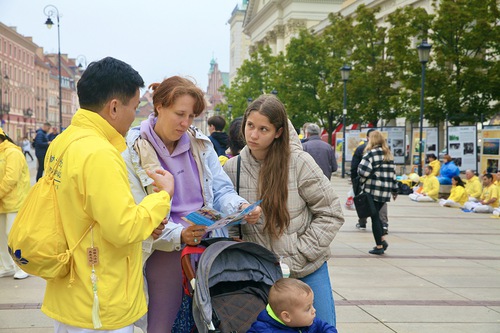 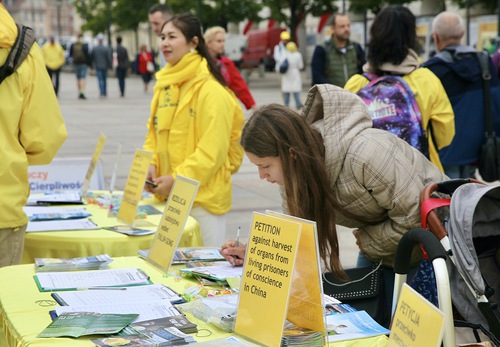 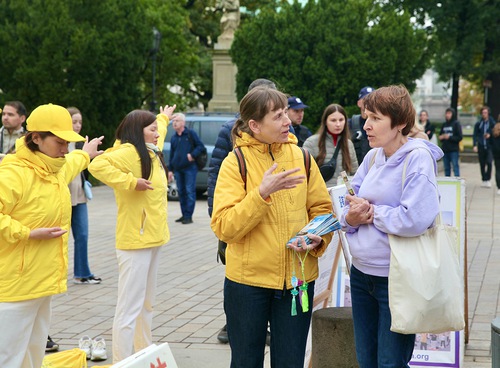 Practitioners tell people about the brutal persecution, and many signed the petition to support their efforts to end it. 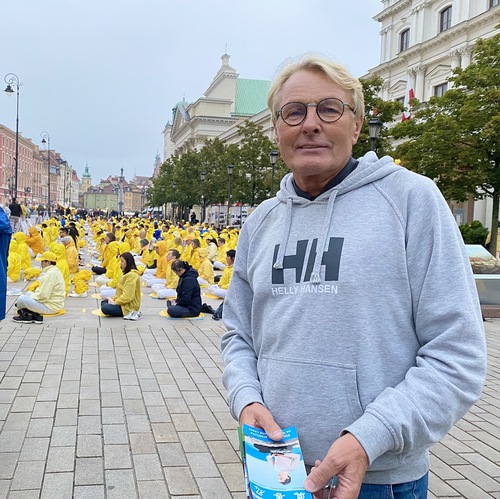 Mr. Krzysztof Dura said, “What is happening in China truly pains me.”

After he learned how the CCP systemically harvests organs from practitioners while they are alive and sells them for organ transplants, Mr. Krzysztof Dura, a construction manager, said, “What is happening in China truly pains me.” He stopped to observe the candlelight vigil, read the information, and signed the petition. “This is horrible,” he said with tears in his eyes.

Mr. Dura said that it was the first time he’s seen practitioners meditate, and it made him feel serene and calm. After he learned that the persecution has gone on for 23 years, he couldn’t believe it. He said it’s important to expose the CCP’s crimes against Falun Dafa. “This persecution is unacceptable. I wish this event success. I hope people in Warsaw wake up,” he said.

The Persecution Is Murder 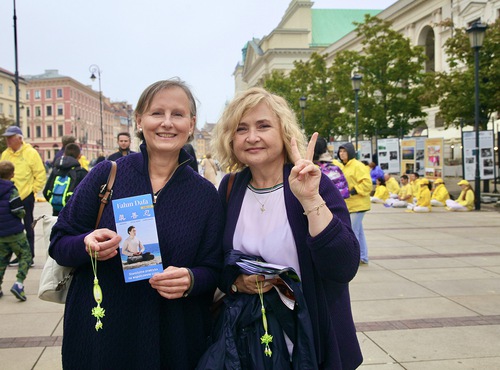 Two violinists, Ms. Dorota Komorowska and Ms. Magda, were on their way to perform when they saw practitioners meditating at the candlelight vigil. They stopped and signed the petition. “When I read about how the CCP harvests organs from living Falun Dafa practitioners and sells them for transplants and when I heard about what happens in the prisons and the persecution tactics, I could only think about how human dignity is lost,” said Ms. Magda. “After reading just the beginning of the flier, I wanted the persecution to stop, because it is murder. I signed the petition to protest the CCP’s live organ harvesting.”

Ms. Dorota Komorowska explained why she signed the petition, “I am against dictatorship and genocide. People should enjoy freedom, human rights, and human dignity. What a tragedy when people are persecuted because they believe in the principles of Truthfulness, Compassion, and Forbearance.”

Ms. Magda agreed, “This is indeed tragic and leaves me speechless! The CCP turns people against people—it’s terrifying.”

They both said that it is important for practitioners in Poland to keep telling people about the persecution. “We have never heard about this [the persecution and the organ harvesting] before. It is actually happening in a civilized world. We are glad that you told us now—it is important,” said Ms. Magda.

Determined to Come to the Event 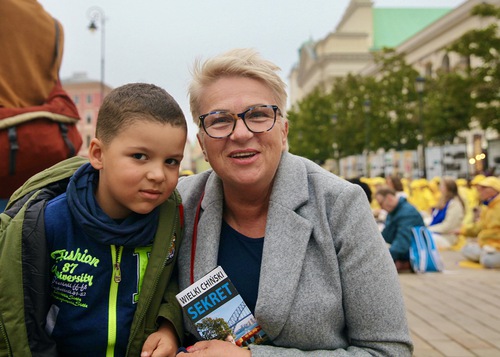 Ms. Katarzyna Marczak and her grandson attended the candlelight vigil.

Ms. Katarzyna Marczak learned about the vigil from the Internet and brought her grandson with her. She signed her and her daughter’s names on the petition. “It is unacceptable that the CCP kills for organs. It’s horrible. The CCP has killed many people, and their families will never find them again. It’s just like what happens during a war,” she said.

“People are being killed for their organs. The whole world watches this and does nothing. This is inhumane. I learned about this event from the Internet and made a point to come here today. The practitioners are magnificent. One of them said that she’s been advocating to end the persecution for the past 20 years.”

She believed that it was essential for the practitioners to publicly bring up the topic. “This can save many people.” She said she wanted to help practitioners and join the peaceful protest.

Ms. Yan and her husband saw practitioners doing the exercises and stopped to talk to them. She said, “Religious freedom is a human right. It’s as simple as that. People should talk about the persecution loudly in public so that the issue will be resolved.”

Intensify the Call to End the Persecution

The practitioners meditating in front of the lit candles gave Anna a tranquil feeling, she said.

“After I read the flier and found out that the CCP persecutes Falun Dafa practitioners, I decided to sign the petition.” The retired economist lived in Poland when it was communist and said that the communists used all kinds of ways to persecute people who did not agree with them.

“I signed the petition because I do not approve of the persecution and terror, because I value freedom,” she said. “It [telling people about the persecution] is very important because most people do not understand what happened or do not want to think about it. You should hold larger events in more places worldwide to cause more ripples so that the CCP will stop the persecution.”