(Minghui.org) Practitioners in Venice held an event on September 3, 2022, to introduce Falun Dafa and tell people about the persecution. Practitioners in Rome and Napoli held similar events and also celebrated the 400 million people who have quit the Chinese Communist Party (CCP) and its youth organizations. Both locals and tourists voiced their encouragement and support.

The events in Venice were held on the Piazza San-Marco on August 20 and September 3, 2022. Practitioners demonstrated the exercises, distributed information about Falun Dafa and the persecution, and collected signatures on a petition to end it. Many passersby stopped to watch, sign the petition, and encourage them. 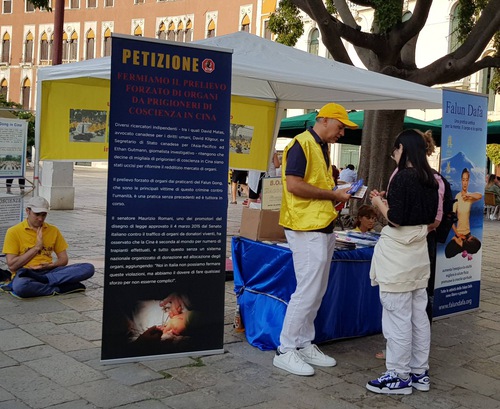 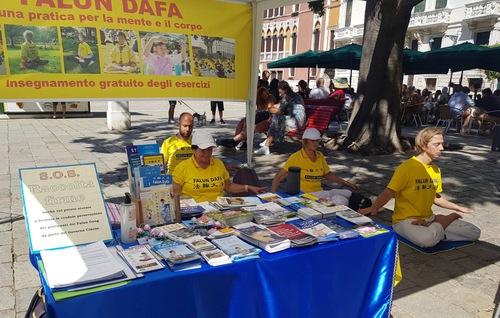 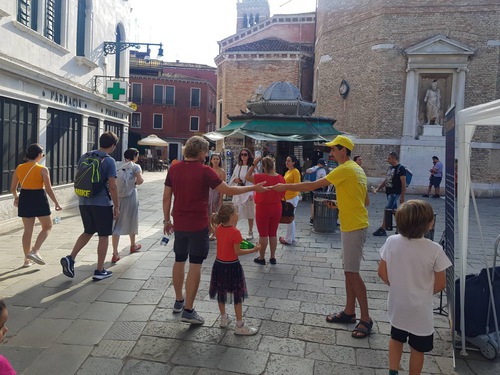 Practitioners held events in Piazza San-Marco in Venice on August 20 and September 3.

Venice attracts millions of tourists from all over the world to enjoy its iconic scenery. Practitioners hold similar truth-clarifying activities here every year.

Two girls from Mestre came with their mother and quietly watched practitioners do the exercises. After observing them for a while, the girls told their mother that they wanted to learn. The mother agreed and a practitioner showed them the movements.

One of the girls kept saying, “Wow, the energy is so great! So wonderful.” The girls learned all the exercises. When their mother saw them learning the movements so attentively, she thanked the practitioner who taught them. The practitioner gave them origami lotus flowers and explained that Falun Dafa also teaches moral virtues that practitioners abide by in their daily lives. The mother exclaimed, “Truthfulness, Compassion, and Forbearance are what they need. These values are very good for my daughters.” The girls asked if they had to pay any fees. When they were told that everything was voluntarily done by the Falun Dafa practitioners, they were touched. 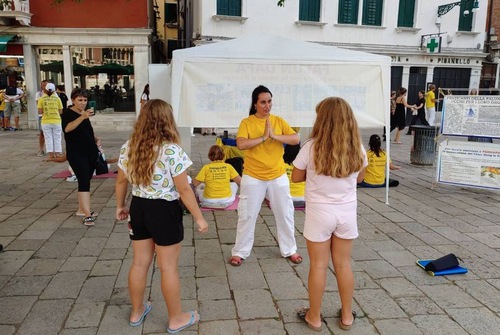 A practitioner teaches the exercise movements to two sisters.

A family from Turin was alarmed by the slander the CCP has directed at Falun Dafa. They could not understand how this persecution has gone on for so many years. They said they really admired Truthfulness, Compassion, and Forbearance and said that they also wanted to try to abide by them. They said that they would go online to search for more information about Falun Dafa. 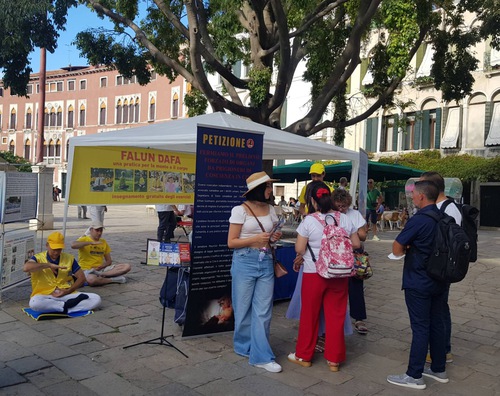 A family from Turin really admires Falun Dafa’s principles and said they want to try to live by them.

Two young tourists from Belgium listened carefully as a practitioner clarified the truth to them. When they learned that practitioners’ organs are being illegally harvested and sold, they said they were angry. They said that the media never reported something so important. One of them said that she broke out in a cold sweat after hearing how practitioners were so cruelly tortured and asked, “What can we do to help you?” They thanked practitioners for telling them about Falun Dafa and the persecution in China. 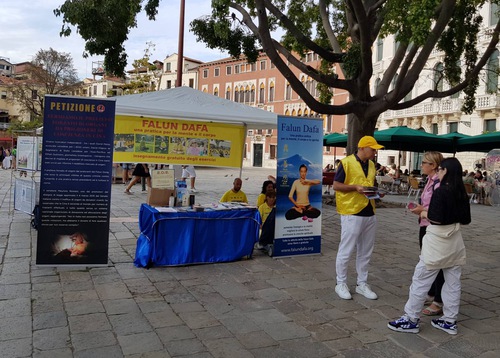 Tourists from Belgium felt indignant because the media does not report on the persecution.

A young man from Valencia said that he really respects Falun Dafa practitioners for doing the exercises in public and sharing such a valuable practice at no charge. He said that things like Tai Chi are usually kept secret and one has to pay to learn.

A group of high school students stood in front of the exhibition booth to wait for their friend. When a practitioner handed them flyers, one of them said, “This is not happening in Italy, so I am not concerned about it. I will never go to China anyway.” The practitioner explained that even though the persecution is not happening in Italy it’s still evil. His friends nodded in agreement.

After reading the information, the students returned and told the practitioner, “We really care about this and would like to look at your other information.” They talked to the practitioner for a long time and explained that they were not indifferent to tragedy taking place thousands of miles away.

A 96-year-old lady told a practitioner that she did not have many more days to live. Being able to hear about Falun Dafa and be given the exquisite small lotus flower souvenir that said “Falun Dafa is good” on it while she was still alive, she said she felt really honored—that it was such a precious gift.

Two tourists from San Francisco in the U.S. thanked a practitioner for telling them about Falun Dafa. They said they knew about qigong and that there are many Asians practicing various cultivation methods in San Francisco. However, they did not know that Falun Dafa was banned and persecuted in China. They also wanted to try to learn Falun Dafa and said they would look for the local Falun Dafa practice site when they went home.

A father and his daughter from the United States listened to a practitioner’s explanation of the persecution. They said that when they watched practitioners do the exercises, they felt a sense of peace and tranquility. They also said that Truthfulness, Compassion, and Forbearance are universal values and no one should die because they practiced them.

Practitioners from Napoli and Rome held an event on Victoria Square in Rome on Saturday, September 3, to clarify the truth and show support for the 400 million people who have quit the CCP and its youth organizations. 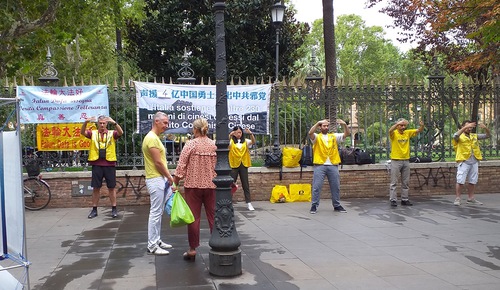 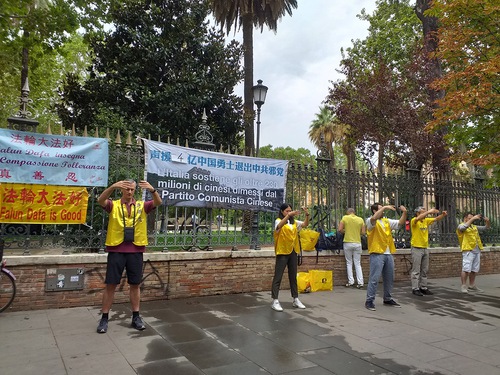 Practitioners in Rome held an event at Victoria Square on Saturday, September 3.

Practitioners hung up banners with information about Falun Dafa on Victoria Square, which is near where most local Chinese people live and gather to socialize. Despite a light drizzle, many Chinese paused to watch practitioners and read the banners. A Chinese lady stood for a very long time next to the electric tram stop. When a practitioner approached her, she seemed nervous but quietly told the practitioner, “I know that Falun Dafa is good. I know! But it is banned and persecuted in China!” Although she did not dare to accept the flyer that the practitioner tried to hand her, she took the small lotus flower souvenir with “Falun Dafa is good” written on it and smiled.

During the event, practitioners delivered information about Falun Dafa and about the 400 million Chinese people who have quit the CCP and its youth organizations to every shop in the area. They hoped that the Chinese who live there could learn the truth about Falun Dafa and choose a good future for themselves.

“Crimes Committed by Fan Huaping, Deputy Secretary of the Shandong Provincial Political and Legal Affairs Committee, in the Persecution of Falun Gong”

“Sichuan Woman Imprisoned for Speaking Up for Her Faith, Denied Family Visits for Two Years”